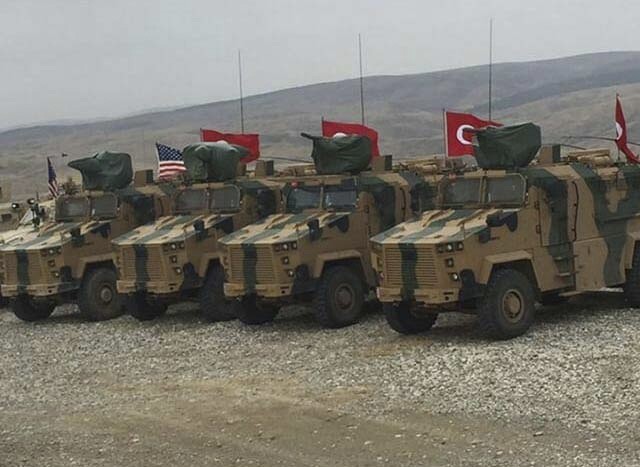 The U.S. has been trying desperately to balance its relations with Ankara and its cooperation with the PKK's Syrian affiliate, the People's Protection Units (YPG). Turkey has been indicating with recent military operations that it will not tolerate terrorists east of the Euphrates, and it has been taking steps to clear terrorists from Manbij as well. Although Turkey has strongly objected to its NATO ally's partnership with the YPG on multiple occasions, the U.S. has insisted on finding a middle ground on which it can continue its partnership with the YPG and "persuade" Ankara to come to an understanding.

However, high-level officials from Ankara indicated that Washington's efforts are in vain as it considers the PKK-linked YPG a national security threat. They have also been highly vocal in their criticism of the U.S.' steadfast support for the terror group.Ankara believes that the U.S. has been using fighting against Daesh as an excuse to justify its heavy arms support to the group which signals that Washington has long-term objectives in the region.

The U.S. special envoy for Syria, James Jeffrey, told Al Arabiya on Thursday that American troops in northeast Syria "were coordinating with the Syrian Democratic Forces [SDF] and with local forces to deter Daesh."

The SDF is an umbrella group that consists mostly of YPG terrorists. The U.S. has been cooperating with the group under the pretext of fighting Daesh. Commenting on joint American-Turkish patrols in Manbij, Jeffrey said the U.S. has resumed efforts to reach a solution between its "two partners."

Last week, Turkish troops stationed at the Syrian border hit YPG terrorists on Sunday and Wednesday in the Ayn al-Arab area east of the Euphrates river in northern Syria, killing at least 14 terrorists. Following the developments, the Turkey-backed Free Syrian Army (FSA) also ramped up its preparations for further operations against the YPG/PKK. The recent operation east of the Euphrates showed that Ankara will not shy away from taking necessary steps to protect its interests as its patience has already been thin due to the sluggish Manbij process with the U.S.

Turkey and the U.S. decided on a road map in Syria's Manbij which foresees the retreat of the YPG from the region. Yet, there were significant delays in the implementing of the deal, which urged Turkey to take initiatives in targeting terror groups east of the Euphrates.

Turkish and U.S. militaries on Thursday started conducting joint patrols in northern Syria's Manbij in line with the deal. The National Defense Ministry on Friday shared footage of the first round of the patrols in the north Syrian town of Manbij. "The joint patrols of Turkish and U.S. troops – on which we have made plans and completed training and which we said would start – began at 3:53 p.m. local time," Defense Minister Hulusi Akar said in Parliament on Thursday.

Turkish and U.S. troops patrolled around the Saju Stream, which separates the Manbij frontline from the city of Jarablus, an area falling under Operation Euphrates Shield, according to Anadolu Agency (AA) reporters on the ground.

Furthermore, Deputy Foreign Minister Sedat Önal on Wednesday headed to the U.S. for high-level talks with officials, diplomatic sources said Friday. Önal continued meetings with the U.S. officials, particularly with the U.S. State Department, on the bilateral relations and regional issues, especially Syria, according to the sources.

Meanwhile, following the first joint patrol in Manbij, President Recep Tayyip Erdogan and his U.S. counterpart Donald Trump discussed bilateral issues, including the latest developments in Syria, such as Manbij and Idlib, in a phone call on Thursday. White House spokeswoman Sarah Sanders also gave information about the Erdoğan-Trump meeting in a written statement, stating that the two leaders particularly addressed the desire to work together on coordination in Syria.

Meanwhile, Erdoğan is scheduled to visit France on Nov. 10-11. During his visit, Erdoğan is also expected to hold bilateral talks with Trump regarding the latest developments in Syria.

The PKK is listed as a terrorist organization by the U.S., the EU and NATO. The PKK has been fighting the Turkish state for the last 40 years in a conflict that has claimed more than 40,000 lives. Turkey considers the YPG's presence on its border with Syria a grave threat to its national security.

In response to the YPG and Daesh threats near its border, Turkey has carried out two cross-border military campaigns in the past two years. The Turkish military and the FSA captured the bordering Jarablus, al-Rai and al-Bab districts from the Daesh terrorist group through Operation Euphrates Shield launched in August 2016.

On Jan. 20, Turkey launched Operation Olive Branch to push the YPG and Daesh terrorists from northwestern Syria's Afrin, liberating the region on March 18 with the help of FSA forces