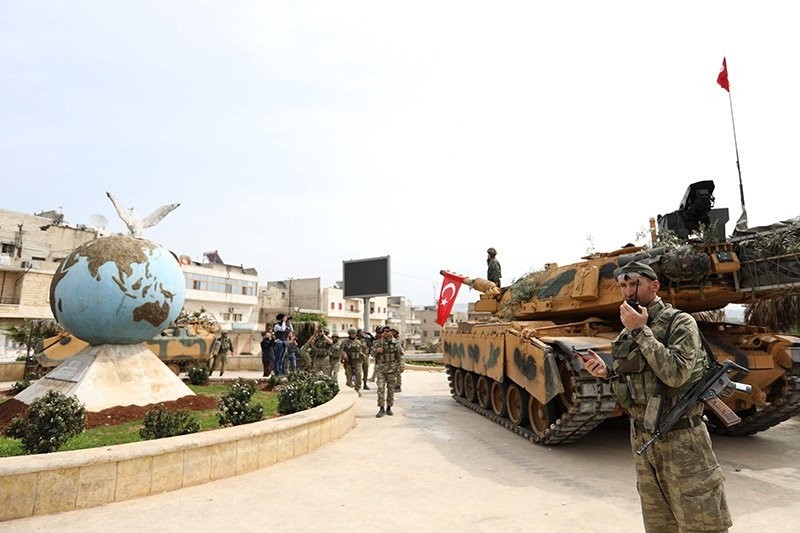 Turkish and FSA troops seen in the streets of the northwestern Syrian city of Afrin after liberating it from PKK/YPG terrorists
by Daily Sabah Nov 05, 2018 12:00 am

Turkey’s warnings to YPG terrorists to leave Syria’s Manbij as soon as possible and the efforts it has channeled for the stability of the region draw full support from local people of Manbij. Some 300 names – including tribal leaders, NGO representatives, military officials and many more – released a statement over the weekend, backing Turkey’s moves against the YPG terrorists

High-ranking officials and local representatives in Syria's northwestern Manbij province announced over the weekend their support for Turkey's effort to push out the PKK-affiliated People's Protection Units (YPG) amid Ankara's repeated demands for the immediate implementation of the Manbij deal that was signed with the United States. More than 300 opinion leaders, including military officials, tribal leaders, nongovernmental organizations and political representatives of Manbij, held a meeting over the weekend under the auspices of the Syrian Stability Committee. According to the statement issued following the meeting, the leaders said, "We stand by Turkey" and added that "hard times will be tackled together."

The U.S. has been cooperating with the Syrian Democratic Forces (SDF), an umbrella group that consists mostly of YPG terrorists, under the pretext of fighting Daesh.

However, high-level officials from Ankara indicated that Washington's efforts are in vain as it considers the PKK-linked YPG a national security threat. They have also been highly vocal in their criticism of the U.S.' steadfast support for the terror group. Ankara believes that the U.S. has been using the fight against Daesh as an excuse to justify its heavy arms support to the group, which signals that Washington has long-term objectives in the region.

In relation to the issue, President Recep Tayyip Erdoğan on Saturday called on YPG terrorists to leave Manbij "as soon as possible."

Stressing that the Manbij road map that was inked by Ankara and Washington was delayed for a very long time, Erdoğan said that the deal began to be implemented and the process is still continuing.

The issue was also discussed in a phone conversation with U.S. President Donald Trump on Thursday, Erdoğan added. The president said that he will meet Trump on the sidelines of the international meeting to be held in Paris Nov. 10-11.

Turkish and U.S. militaries on Thursday started conducting joint patrols in Manbij in line with the Manbij deal. The Ministry of National Defense on Friday also shared footage of the first round of the patrols in the north Syrian town of Manbij.

As agreed by the two NATO allies in early June, Turkish and U.S. forces have been carrying out patrols in Manbij, but those are independent of each other. The Manbij patrols are part of a road map that Ankara and Washington agreed on in early June to defuse tensions that were strained due to the latter's support for the YPG terrorist organization, which Turkey considers a national security threat.

The Manbij road map foresaw a three-month timetable for the withdrawal of the YPG from the northeastern Syrian province and joint patrols to be conducted by the militaries of both countries in order to establish stability in the region. However, the U.S. continues to drag its feet on the implementation of the deal while the terrorist group tightened its grip on the city.

The YPG, which Turkey considers a grave threat to its national security, is the Syrian offshoot of the PKK, which is listed as a terrorist organization by the U.S., the EU, and NATO. The PKK has been fighting against the Turkish state for the last 40 years in a conflict that has claimed more than 40,000 lives. The YPG and PKK's ultimate aim is to establish an autonomous region in parts of Turkey, Syria, Iraq and Iran. In response to the YPG and Daesh threats near its border, Turkey has carried out two cross-border military campaigns in the past two years, while promising to extend its military operation to the east of the Euphrates if the security threat posed by the terrorist group continues.