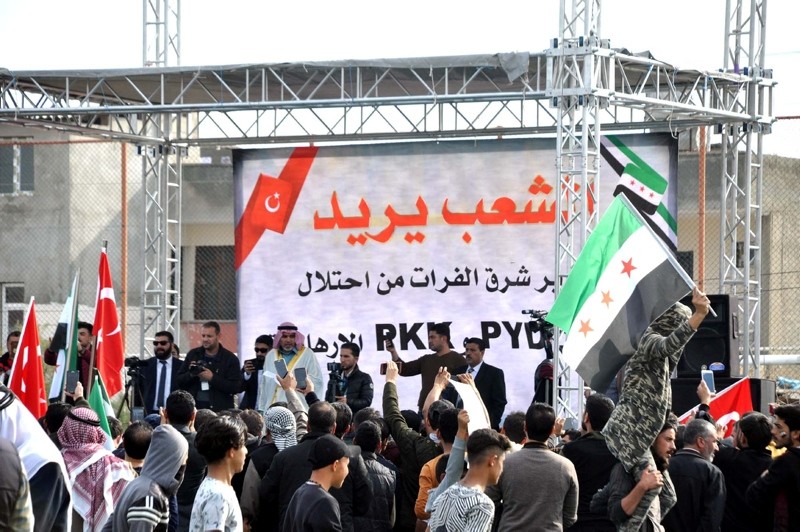 Nearly 3,000 Syrians who fled civil war in their homeland gathered under tight security measures in Akçakale district of Şanlıurfa province along the Syrian border.

The group called on Turkey to launch a counterterror operation against the YPG east of Euphrates in order to liberate the Syrian city of Tal Abyad.

Aliya al-Nasir, one of the Syrians speaking on behalf of the crowd, said the atrocities committed by the terror group were unacceptable.

"We request the Turkish military and the Free Syrian Army (FSA) to launch an operation east of the Euphrates (River) in order to free our provinces, districts and villages from the occupation (of the terror group)," al-Nasir said, recalling Turkey's two successful operations against Daesh and YPG in northern Syria in recent years.

Following the operations Euphrates Shield and Olive Branch, "terrorists fled the area and residents safely returned to their own settlements," she said, adding the new operation could bring peace and safety in Tal Abyad.

Turkish troops -- backed by the FSA -- liberate large swaths of northwestern Syria from terrorist groups during the Operation Euphrates Shield in 2016, while the Operation Olive Branch dealt a heavy blow to YPG and Daesh terrorists liberating Syria's Afrin region in early 2018.

The group chanted slogans praising Turkish President Recep Tayyip Erdoğan and the FSA, while shouting against the terror supporters.

Al-Nasir also called on the U.S. administration to stop supporting the PKK-affiliated Democratic Union Party and its armed wing YPG.

"Let Syria live in unity and freedom," she concluded.

Turkey has long protested U.S. support for the YPG, while Washington sees it as a "reliable ally" in its fight against Daesh in Syria.

In its more than 30-year terror campaign against Turkey, the PKK -- listed as a terrorist group by Turkey, the U.S. and the EU -- has been responsible for the death of some 40,000 people, including women and children. The YPG is its Syrian branch.