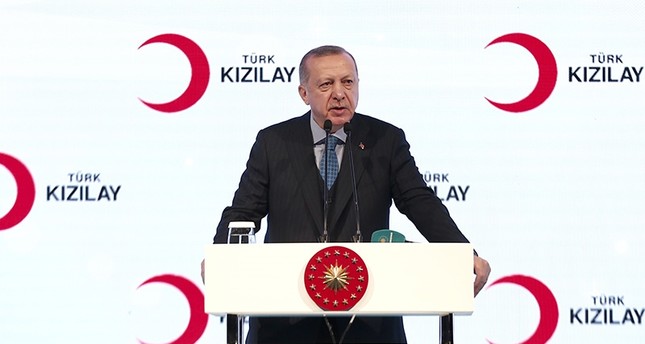 Turkey will soon launch an operation east of the Euphrates to clear out remnants of Daesh terrorists, President Recep Tayyip Erdoğan said Monday.

Speaking at a meeting of the Red Crescent, Erdoğan said that Turkey will destroy the remaining Daesh elements in Syria, which were specifically trained to target the country.

"Turkey is not only for the eradication of the terrorist organization but is also making great efforts to mitigate the effects of the humanitarian crisis caused by the conflict in Syria," the president said.

"They provided arms to another terrorist organization to fight Daesh," he said, in reference to the YPG.

Erdoğan noted that Turkey continues to keep in touch with military forces in the field, especially with the U.S. and Russia to ensure peace, stability and security east of Euphrates.

"We have had very positive consultations with both sides," he added.

Erdoğan noted that Muslim countries have been unable to effectively cope with crises in their own region, including the attacks on the legal status of Jerusalem, the Syrian crisis and the conflict in Yemen.