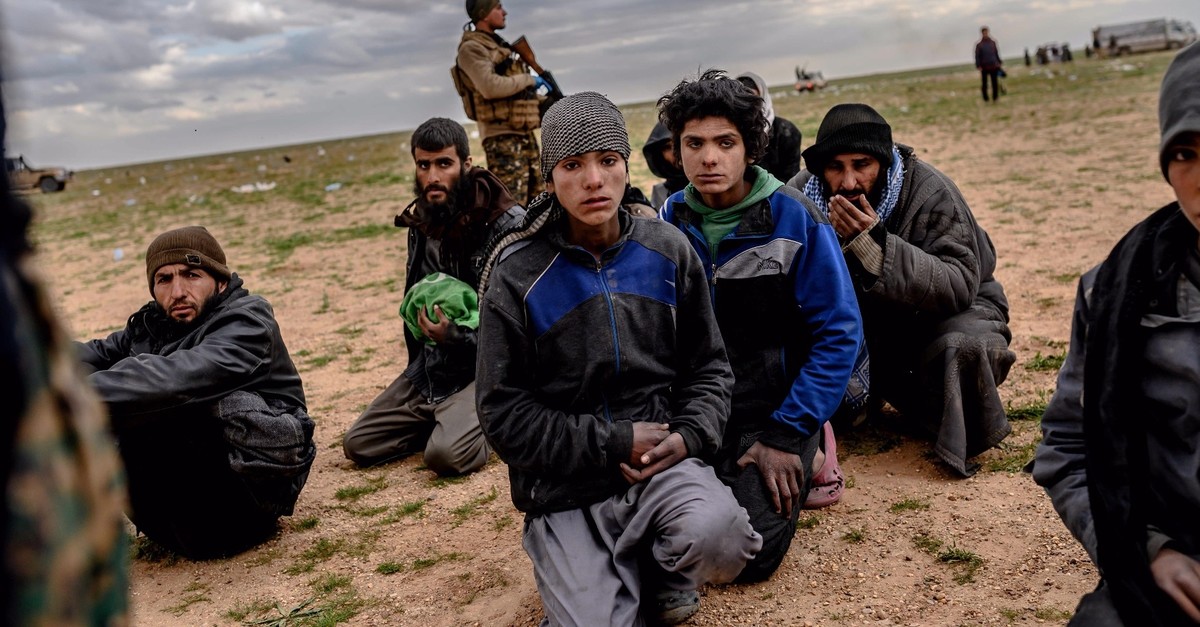 Men and boys suspected of being Daesh members wait to be searched by YPG militants after leaving the Daeshu2019s last holdout of Baghouz, in Syriau2019s northern Deir el-Zour province on Feb. 27, 2019.
by Daily Sabah Mar 05, 2019 12:02 am

The YPG says nearly 300 suspected Daesh militants were released out of ‘cooperation', claiming ‘they had lost their way'

U.S.-backed PKK affiliate groups in Syria, which have received enormous amounts of diplomatic and equipment support from Washington under the pretext of "fighting Daesh," released nearly 300 militants of the terrorist organization. Emphasizing "cooperation and fraternity" between them and the captive militants, the People's Protection Units (YPG) released a statement on late Saturday announcing the move. According to the statement, the PKK's Syrian wing freed 283 Syrians suspected of being members of Daesh in several provinces. With reasoning that the YPG wanted "no blood on their hands," the decision was made after mediation with tribe leaders and some local officials. Washington has been lending vast support to the YPG on the grounds of the anti-Daesh fight, despite the U.S. recognizing the PKK as a terrorist organization in the same way Turkey does.

Ankara strongly criticizes "fighting against terrorism" as pretext for the support, saying that using one terror group to fight another makes no sense.

"They had lost their way... violated the traditions of the Syrian society and the law, and some of them had been deceived... but they remain our Syrian children," the YPG statement said, emphasizing that releasing Daesh militants is a gesture of "cooperation, fraternity and clemency."

A U.K.-based human rights monitor, the Syrian Observatory for Human Rights, announced that the number of freed militants was particularly large this time compared to previous releases.

The YPG holds a large number of Daesh captives along with their families and often uses them to secure its support from the U.S. and European countries. In late December, after President Donald Trump announced Washington's withdrawal from Syria, a YPG official said the terrorist group is planning to release Daesh prisoners, The New York Times reported.

"The best result of terrible options is probably for the Syrian regime to take custody of these people," the official was quoted as saying by the paper, adding that, "If they are released, it's a real disaster and a major threat to Europe."

The move came despite the YPG making an announcement on the issue last month, saying that they will not release Daesh detainees that they hold "but countries should do more to take them back," after Trump's demand that European countries take back Daesh militants captured by the YPG in northern and eastern Syria. The demand, however, was being approached cautiously by Europe. According to the official from the group, the number of foreign Daesh fighters and family members in their custody is growing by the dozens each day, and the captives are representing "a time bomb" since 800 militants plus 1,500 children and 700 wives "could escape in an attack" on the YPG-led area.

Turkey sees the YPG as an extension of the PKK, a group that has claimed the lives of more than 40,000 people in its 30-year terror campaign against Turkey. The power vacuum sparked by the Syrian civil war gave the YPG an opportunity to practically apply its form of governance and form communes dictated by its ideology. On July 19, 2012, the group began their efforts to gain autonomy by establishing a de facto autonomous region in Syria by connecting the northwestern Afrin canton to the Kobani and Jazeera cantons in the northeast.