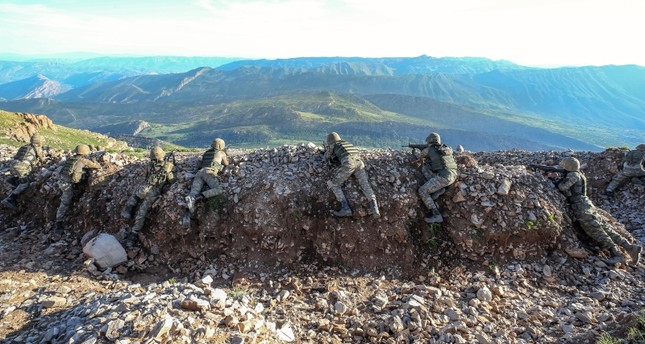 "Four more PKK terrorists have been neutralized as part of ongoing Operation Claw in Hakurk region of northern Iraq," the ministry tweeted.

"Therefore, the number of terrorists neutralized so far as part of the operation has risen to 19," it added.

Turkish jets also destroyed weapon pits, shelters and munition depots used by PKK terrorists in the Avasin-Basyan and Metina regions of northern Iraq as part of the ongoing operation, the ministry said.

Operation Claw was launched at 8 p.m. on Monday as Defense Minister Hulusi Akar, Chief of General Staff Gen. Yaşar Güler and Army, Air Force and Navy commanders directed the operation throughout the night at the Command and Operation Center at General Staff headquarters in Ankara.

Turkey had previously warned the Kurdish Regional Government (KRG) and Iraqi government numerous times to eliminate the PKK's presence to maintain Turkey's border security. Despite top officials from both governments often expressing their discomfort with PKK camps and activities, saying that they won't allow militants to attack Turkey from their soil, no serious action was taken in this regard.

With no concrete results from the efforts of Iraq and the KRG, Turkey has been going its own way in recent years and taking a hard line against the PKK presence in northern Iraq. Last year, security forces crossed 30 kilometers (17 miles) into northern Iraq and nearly 200 terrorists have been killed in months of operations against PKK targets.

During the operation, two Turkish soldiers, Lt. Raşit Aydın and Sgt. Mehmet Taştan, were killed Wednesday as an explosive trap laid by PKK terrorists was detonated. The wounded soldiers were brought to Turkey for treatment but could not be saved despite all efforts.

The Qandil mountains, located roughly 40 kilometers (25 miles) southeast of the Turkish border in Iraq's Irbil province, are being used as a headquarters by the PKK and its Iranian affiliate, the Kurdistan Free Life Party (PJAK), although the area is under de jure control of the KRG. The area has frequently been hit by the Turkish Armed Forces (TSK) in the last decade, yet a ground operation had not been launched in recent years. Qandil became the PKK's main headquarters in the 1990s after it had used the Beqaa Valley in Lebanon as training grounds for many years.

Video footage of the operation shows that four PKK terrorists surrendered after they were trapped in a cave in the Hasankeyf district of Batman province.

It was also revealed that H.O. and U.T. were the perpetrators of the terrorist attack that killed eight Turkish soldiers in the Dargeçit district of southeastern Mardin province on Oct. 4, 2018. An investigation into these four terrorists is ongoing.

Share on Facebook Share on Twitter
Previous in War On Terror The Gülenist Terror Group (FETÖ) members deported by Pakistan have... Next in War On Terror Turkey will continue to fight all terror groups with resolution and...
DAILY SABAH RECOMMENDS