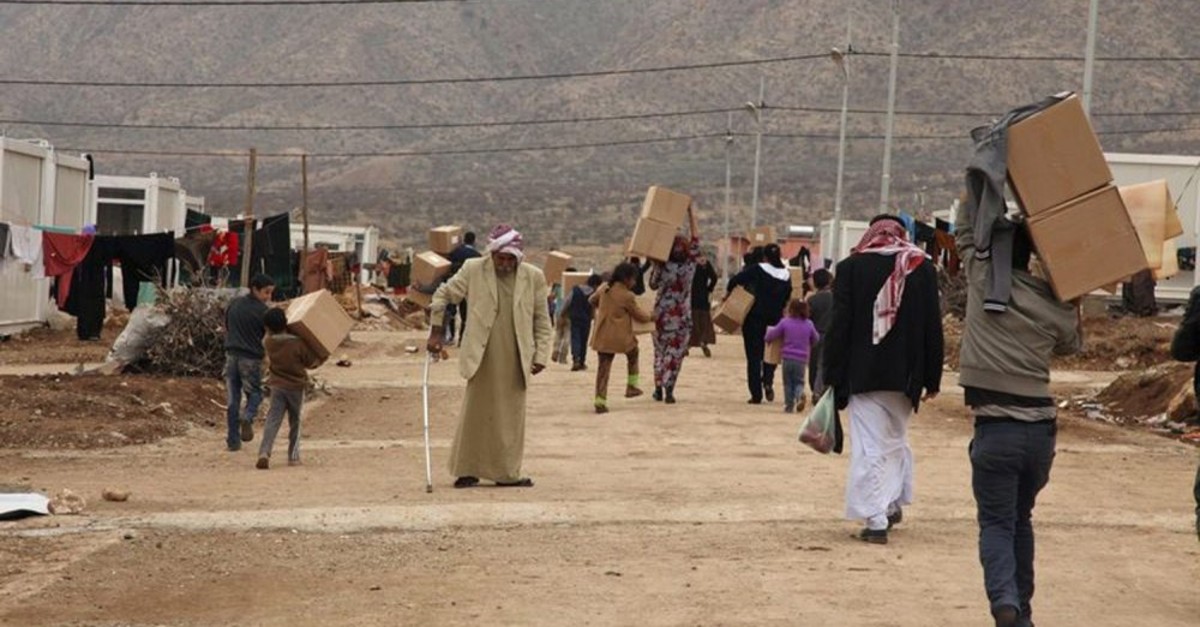 Displaced Iraqi people from the minority Yazidi sect, fleeing violence in the Iraqi town of Sinjar west of Mosul, walk to the Qadia camp on the outskirts of Dohuk province, Dec. 7, 2014.
by Daily Sabah with AA Jul 10, 2019 12:11 am

Members of the Yazidi community, who had to flee to their hometown because of Daesh attacks in 2014, could not return to their homes in Sinjar district of northern Iraq's Mosul due to the PKK's presence and activities in the region, said Veyis Nevaf, the Sinjar district parliament chairman. Speaking to Anadolu Agency (AA) reporters, Nevaf said nearly 75 percent of Yazidi immigrants could not return home because of the PKK terrorists' control over the town and expressed the Yazidi community's discomfort with the terrorist group. Nevaf is also among those who cannot return to Sinjar and lives near Duhok in northern Iraq.

Stating that the Yazidis had to flee the town in 2014 when Daesh intensified its attacks on the region and that they could still not return home although the Daesh threat had been eliminated, Nevaf added: "Some 75 percent of immigrants from Sinjar could not return to their homes due to the PKK's presence in the region. These people still live in immigrant camps near the border of Duhok. The only thing PKK does is cause chaos in our town."

In mid-2014, the PKK managed to establish a foothold in Sinjar on the pretext that it was protecting the local Yazidi community from Daesh, expanding its presence in northern Iraq. Ankara has been highly vocal in its criticism of the PKK's presence in Sinjar, as the terrorists' position on the Turkish border poses a significant threat to the country.

Many high-level Kurdistan Regional Government (KRG) officials previously accusing the PKK of causing chaos in the region called for the terrorist organization to leave the region. However, no concrete action has been taken so far on the issue by the KRG or the Iraqi central government.

Turkey had previously warned the KRG and Iraqi governments numerous times about eliminating the PKK's presence to maintain Turkey's border security. Despite top officials from both governments often expressing their discomfort with PKK camps and activities, saying that they won't allow militants to attack Turkey from their soil, no serious action was taken in this regard. With no concrete results from Iraq and the KRG, Turkey decided to take things into its own hands and assumed a hard stance against the PKK presence in northern Iraq. Northern Iraq has frequently been hit by the Turkish military since the early '90s due to terror threats directed by PKK terrorists from the Qandil mountains, located roughly 40 kilometers southeast of the Turkish border in Iraq's Irbil province. The mountains are used as headquarters by the PKK and its Iranian affiliate, the Kurdistan Free Life Party (PJAK).

Since March 2017, the number of operations in the region has escalated and the Turkish military set up bases for tanks, helicopters and drones for the operations aiming to eliminate the PKK leadership. Qandil became the PKK's main headquarters in the 1990s after it used the Bekaa Valley of Lebanon as training grounds for many years.

Turkey's predominantly Kurdish-populated southeastern region also had suffered from PKK terror for years. However, since the terrorist group was cleared from the region with successful counterterrorism operations in 2015, residents of the southeastern provinces have been enjoying terror-free lives and benefit from tourism opportunities. In one of these places, southeastern Hakkari's Çukurca district, locals have started to flock to leisure activities, whereas these areas had seen no activity previously due to security concerns.

Saying that some Yazidi families returned to Sinjar last year, Nevaf added that these families have been exposed to the terrorist group's oppressive practices, including collecting tribute and forcibly recruiting young people. He also stated that local people can return safely when the PKK completely leaves the town. Another problem caused by the PKK presence is the prevention of reconstruction of the city and infrastructural investments, according to Nevaf.

Formed in 1978, the PKK terrorist group has been fighting the Turkish government for an independent state. Its terror campaign has caused the deaths of more than 40,000 people. The PKK is an internationally recognized terrorist organization and is listed as such by the U.S., Turkey and the European Union.