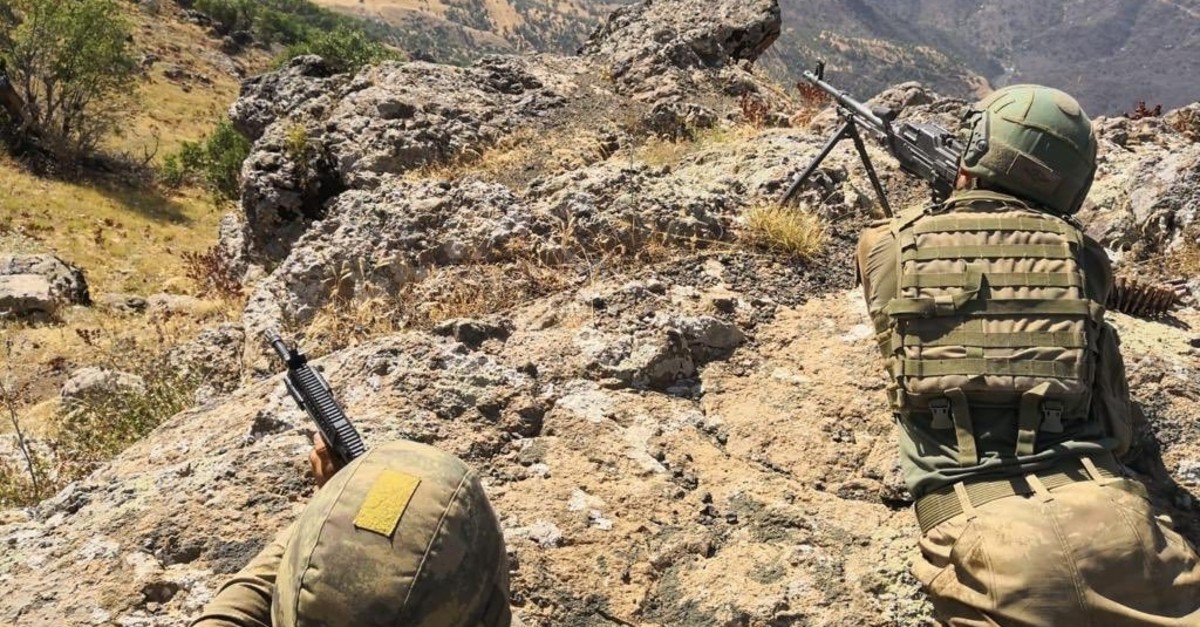 The Turkish military has killed 255 PKK terrorists in Operation Claw in northern Iraq, the National Defense Ministry said on Saturday.
by Daily Sabah Jul 29, 2019 12:11 am

Turkey has stepped up its efforts to end the decades-old presence of the terrorist PKK in northern Iraqi territories, which has caused stability and security problems in the region, depriving it of economic and social development. Ankara has put forth both military and diplomatic approaches to eliminate the PKK and prevent its revival. In the past 18 months, the Turkish military has established settlements in northern Iraqi territories.

Last March, the Turkish Armed Forces (TSK) started to expand its area of influence with an extensive military operation to cut the connection between Mount Qandil, where the PKK leadership is believed to be located, with Sinjar and other parts of Iraq to hinder logistics. As part of the operation, TSK pushed nearly 30 kilometers into northern Iraq to Mount Qandil and set up bases. The operations were intensified after July 2018 and became routine since the beginning of another extensive campaign, Operation Claw, which was launched May 27 to entirely eliminate the presence of the terrorist organization in northern Iraq. On July 13, TSK launched Operation Claw-2 as a follow up to the successful Claw-1.

The Turkish military has killed a total of 255 PKK terrorists in these counterterrorism operations carried out in northern Iraq, the National Defense Ministry said on Saturday. The ministry shared the latest figures on Twitter.

According to the figures, in operations conducted between July 17 and July 19 alone, 34 terrorists were killed in airstrikes carried out in the Qandil and Karacak regions of northern Iraq. Over 20 aircraft took off from the air combat command for the strikes, while UAV's, Airborne Early Warning and Control (HIK) aircraft as well as tanker aircraft participated in the mission. These operations are differentiated from previous campaigns by the fact they are not short-lived offensives but will instead provide a long-term settlement for the Turkish army in northern Iraq. For instance, in 1983, 5,000 Turkish soldiers crossed the Iraqi border, advancing 5 kilometers and carried out a land operation on Mount Qandil. In 1995, the Turkish army launched "Operation Steel," with 35,000 personnel. However, the Turkish army completely left the area following both military operations, which resulted in re-possession of the area by the terrorist organization.

President Recep Tayyip Erdoğan also touched upon the success of the operation on Friday, announcing that soon the Turkish military will reach Qandil and eradicate the terrorists from the region. In its more than 30-year terror campaign against Turkey, the PKK, which is listed as a terrorist organization by Turkey, the U.S. and the EU, has been responsible for the deaths of nearly 40,000 people, including women and children. Along with military operations cementing ties between Ankara and Baghdad, high-level visits and talks have helped in taking joint measures against the PKK. Both Iraqi President Barham Salih and Prime Minister Adel Abdul-Mahdi visited Ankara this year and met with high-level Turkish officials, including Erdoğan. Both sides evaluated future steps for counterterrorism efforts. Similarly to Baghdad, Turkey also made a clean start with the Kurdistan Regional Government (KRG) with the visit of newly elected President Nechirvan Barzani to Turkey in June.

Meanwhile, the identity of one of the assailants implicated in the killing of Turkish diplomat Osman Köse in Irbil was revealed early yesterday by KRG police. The KRG identified the assailant as Siyako Baki Abdulkerim and shared his photo. In a statement, KRG police said that security forces are searching for the attacker. A group of four terrorists including Mazlum Dağ, the assailant implicated in the killing of the Turkish diplomat, were captured alive and detained in northern Iraq, a statement from the Irbil Security Directorate said on Saturday.

Ankara is expected to apply more pressure on the KRG via diplomatic channels, especially after the killing of Turkish diplomat Osman Köse earlier this month in an armed attack at a restaurant in Irbil, where he was serving at Turkey's Consulate. It would also contribute to efforts to restrict the terrorist organization's activities on KRG soil.

The quick response that was given to the perpetrators Köse's murder, he was the first Turkish diplomat assassinated in 25 years, also demonstrated Ankara's influence in the region. While the Turkish government closely monitored the KRG police's efforts to capture the criminals, pinpoint operations to those responsible for the act were also carried out in a short time.

First, two senior PKK terrorists who planned the attack were killed in two separate operations. The first one took place in Duhok on July 18, while the second operation took place in northern Iraq's Batika six days after the first on July 24. Also, Erdoğan Ünal, a senior member of the PKK terrorist organization and the instigator of the assassination, was killed in an anti-terror operation in Qandil on July 24.

400 village evacuated in northern Iraq due to PKK threat