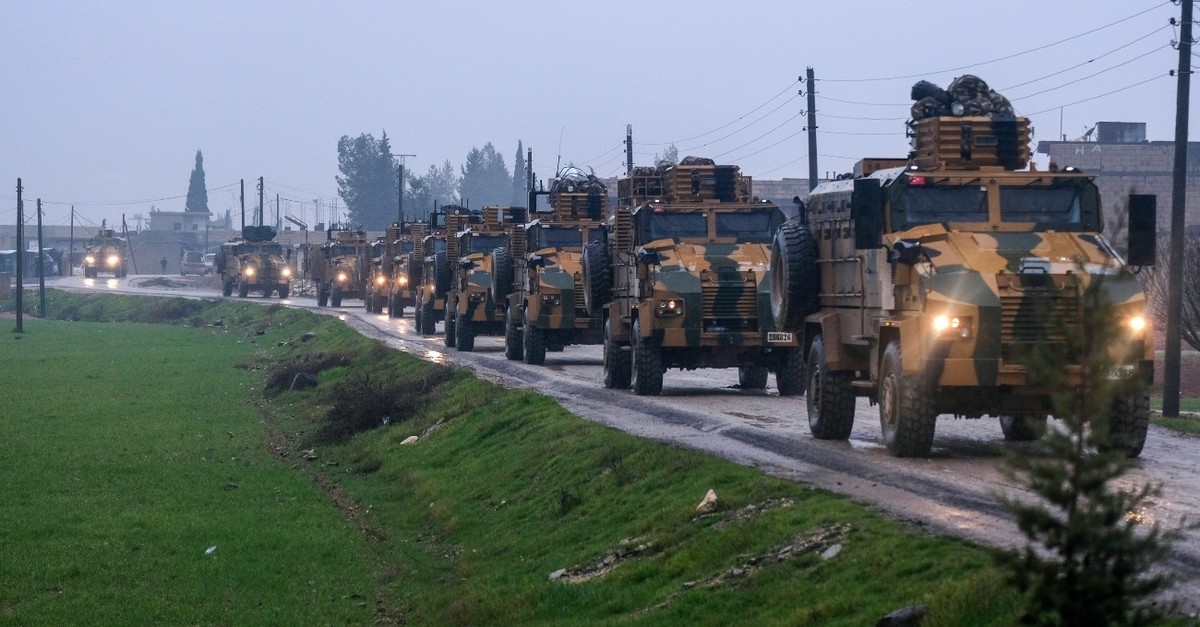 Turkey has been deploying military equipment and forces near the Syrian border for a possible operation east of the Euphrates.
by Nur Özkan Erbay Aug 02, 2019 12:30 am

Statements made after the six-hour-long National Security Council (MGK) meeting chaired by President Recep Tayyip Erdoğan this week, involved significant messages in many respects. However, the most striking were probably military operations that have been discussed for awhile to eliminate the PKK and People's Protection Units (YPG) presence east of the Euphrates, and a message indicating the subsequent establishment of the envisaged safe zone.

The following expression: "Our determination concerning the effort to establish a 'Peace Corridor' with all our power for our security due to the increase of threats to our country stemming from the authority gap along our border," was a key part of the message.

At this point, the fact that the expression Peace Corridor was written in bold letters in the text, signifies that the

message can be summarized by Ankara's words to the U.S. last week: "We have no more patience left," confirming the government's top security consultation and decision-making authority.

Meanwhile, as a signal of the operation drawing nearer, Erdoğan made a surprise visit to Nationalist Movement Party (MHP) Chairman Devlet Bahçeli the previous day in his home, which is rare, and talked about important matters on the domestic and foreign agenda.

It is known that Erdoğan, who called Saudi King Salman to offer condolences later on the same day, spoke to him about regional topics, mainly Syria.

Remembering President Erdoğan's speech last Friday in a meeting with his party's provincial heads was mostly about the necessities, legitimacy and grounds for an operation east of the Euphrates, also indicates that the operation is near.

Erdoğan's message "If we are strategic allies that act like one" toward the U.S. in his speech and the message "we will destroy the terror corridor" of the YPG, which the U.S. sees as an ally, drew attention.

On the other hand, the words of National Defense Minister Hulusi Akar during his phone call with his U.S. counterpart

Mark Esper earlier this week, saying that the safe zone will be established unilaterally if Turkey and the U.S. cannot find a middle ground, grabbed attention.

Turkey has struggled and expended energy to be on the same page with the U.S. on the recognition of the PKK-YPG threat east of the Euphrates, yet given these signals, it does not seem likely that it will spend further effort to convince Washington.

Even though a crisis shaped by the S-400, F-35 and potential sanctions came in between, Ankara's main agenda with the U.S. is the threat caused by the de-facto formation of a PKK-YPG corridor in Syria.

However, Washington and Ankara's perception of threat in this matter has not overlapped since that day. Let alone overlapping, Washington's attitude of stalling and rejecting Ankara in this regard has not changed either. In other words, Washington has not given up its insistence on describing the YPG as "the Kurdish allies in Syria." While the U.S. Special Envoy to Syria gave the message "we understand your concerns" in Ankara to his Turkish counterparts, the U.S. Central Command general met with the top YPG-PKK commander at the same time.

Syria. In other words, the deep discord between the two countries is not actually today's issue.

Certainly, one of the most important disagreements between Turkey and the U.S. for a long time is the terror corridor in northern Syria and Washington's support for it. However, what is more important is that apart from President Donald Trump, U.S. decision makers maintain their relationship with Turkey as a strategic alliance based on unilateral interests.

In the light of recent developments, it can be said that Trump has made progress in this matter in a short time, yet it seems difficult to predict that the establishment – often attacking Trump himself – put their insistence aside and open a new page with Turkey. The first condition to open a new page in a strategic alliance was to consider not only unilateral interests but also the national interests of both sides; however, so far, this process has worked against Turkey. Moreover, while the U.S. was trying to solidify its regional interests through Syria, Turkey has striven for eight years to deal with threats against its national interests.

Thus, the basic motive for the Peace Corridor operation in northern Syria is that Ankara will not put up with or endure this asymmetrical balance of interests, not even for a day.