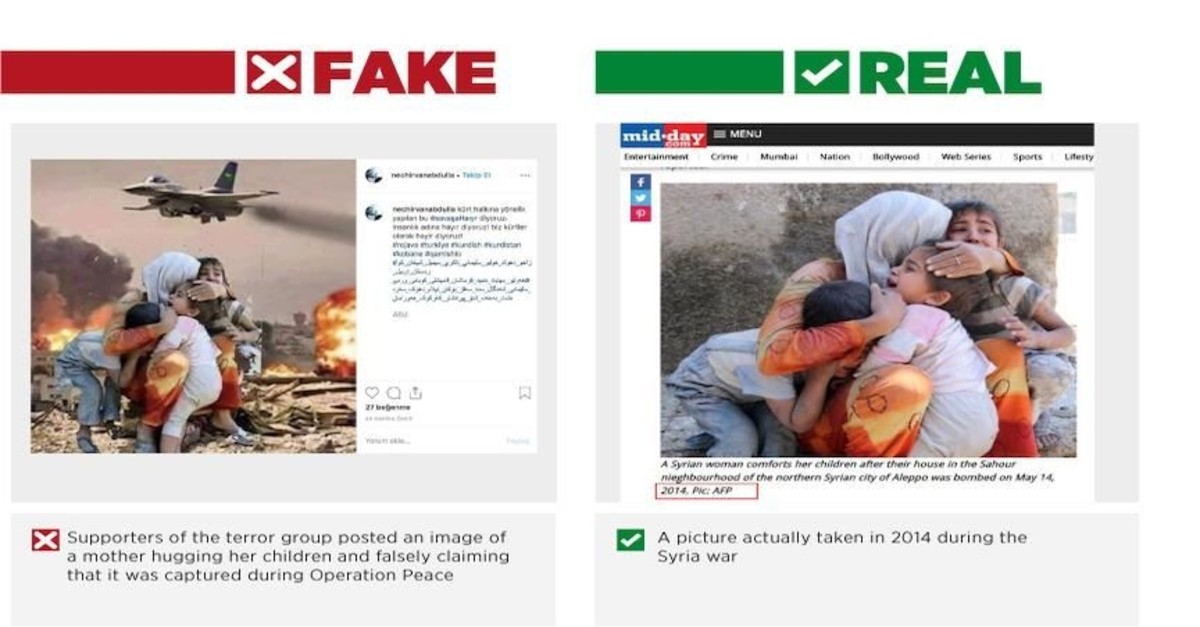 On Wednesday Turkey launched Operation Peace Spring east of the Euphrates River in northern Syria to secure its borders by eliminating terrorist elements to ensure the safe return of Syrian refugees as well as Syria's territorial integrity.

Soon after the military operation, pro-YPG/PKK social media accounts posted manipulated and even doctored photos from the Syrian conflict to mislead the international community.

For instance, supporters of the terror group posted an image of a mother hugging her children during the Syria war, a picture that was actually taken in 2014, falsely claiming that it was captured during Operation Peace Spring.

They also manipulated a photo of children being taken to a health center in the wake of an airstrike in Idlib, Syria this July, intentionally mislabeling the picture: "The latest images from the Turkish army's attacks." 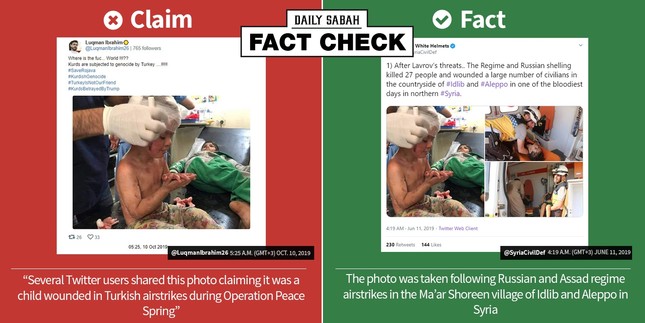 Pro-terrorist accounts also spread the image of a child with a bloody face as the result of a Russian airstrike on Idlib in August 2016, over two years ago, falsely claiming it was shot during Turkey's current anti-terror operation in northern Syria.

As part of their disinformation campaign, they also spread a May 2014 image of a man carrying a child's body in Aleppo after airstrikes by the Assd regime, misrepresenting it as taken during Operation Peace Spring.

"We will continue our fight crime and criminals everywhere as well as in the virtual environment," the Turkish Security General Directorate said.

Another investigation has been launched against the pro-PKK People's Democratic Party (HDP) deputies, including the co-chairs of the party, Pervin Buldan and Sezai Temelli.

The deputies are being accused of circulating terrorist propaganda while openly degrading the Turkish Republic in their press briefings after the operation was launched.

The terrorist group PKK and its extension the YPG/PYD constitute the biggest threat to Syria's future, jeopardizing the country's territorial integrity and unitary structure, Turkish leaders have said.

Turkey shares a 911-kilometer (566-mi) border with Syria, and it has long decried the threat from terrorists east of the Euphrates and the formation of a "terrorist corridor" there.

Turkey plans to resettle 2 million Syrians in a 30-km-wide (19-mi) safe zone to be set up in Syria, stretching from the Euphrates River to the Iraqi border, including Manbij. However, the presence of terror groups such as the PKK, PYD, and YPG risk its formation.

In two separate cross-border operations, Turkey has rid an area of 4,000 square km (1,544 sq mi) in Syria of terrorist groups.

Turkey has suffered greatly from Daesh attacks inside the country. More than 300 people have been killed in attacks claimed by Daesh in Turkey, where the terrorist group has targeted civilians in suicide bombings and armed attacks in recent years.

In its more than 30-year terror campaign against Turkey, the PKK-listed as a terrorist organization by Turkey, the U.S. and the EU — has been responsible for the deaths of some 40,000 people, including women, children, and infants.