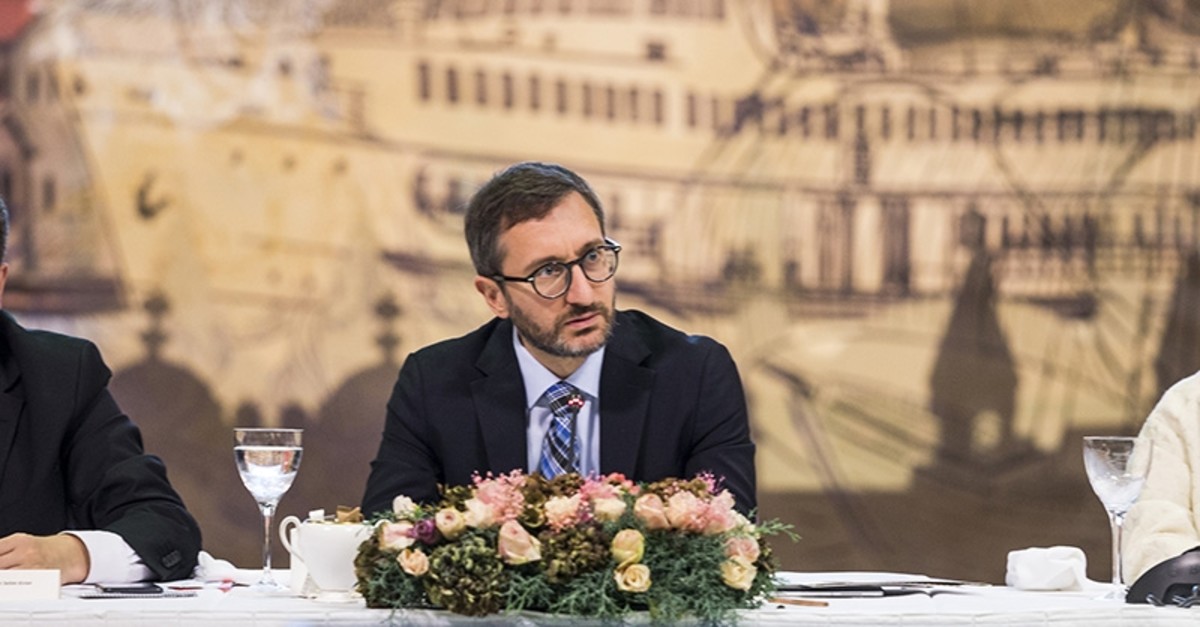 Operation Peace Spring has been necessary ever since the Obama administration decided the arm the PKK terrorist organization's Syrian affiliate, Presidency Communications Director Fahrettin Altun said Monday, noting that since that day, Ankara has said it will not allow the creation of a terror corridor along the country's borders.

The operation asserted once again that the country will do what is necessary to fight terrorism, Altun said, stressing that the second operation – Operation Olive Branch, which aimed to clear Syria's Afrin from the People's Protection Unit (YPG), the PKK's Syrian offshoot – prevented the terrorists from reaching the Mediterranean.

Turkey launched its third cross-border counterterrorism operation, Operation Peace Spring, in northern Syria targeting terrorists affiliated with Daesh and the YPG on Oct. 9. This operation aims to eliminate the threat of an establishment of a terror corridor and provide the safety and security of Turkish people while allowing the return of Syrian refugees to their homes, Altun said.

Altun also highlighted that the use of domestic defense products in the field during the operation – including armored vehicles, unmanned aerial vehicles (UAV), storm howitzers, snipers and laser missiles – has increased that country's military power.

Exports in the country's defense and aviation sector increased by 37.7% compared to the previous year, breaking a record, Altun added.

Altun highlighted that Operation Peace Spring is being carried out with utmost sensitivity in order not to harm any civilians or historical artifacts, cultural and religious places. However, the terrorists are attempting to take advantage of Turkey's discretion by using civilian settlement areas as their bases for the attack and wearing civilian clothes.

Altun said that there are a large number of Kurdish refugees in Turkey as well as they were forced to leave their homes for not adapting the PKK terrorists' ideology. The operation aims for the voluntary return of these refugees to Syria after more steps are taken, such as providing shelter, schools and hospitals, which requires financial support from the international community.

Altun noted that there is no such thing as the rumored release of Daesh terrorists. "Turkey was far ahead of the international community in fighting terrorism from the very beginning of the Syria crisis," adding that the country showed great effort to capture the foreign nationals in Daesh while they were traveling from European countries to join the terrorist organization.

Later on Monday, Altun criticized the "false equation" of Syrian Kurds with the PKK terrorist group and its Syrian offshoot.

We categorically reject the false equation of Syrian Kurds with the terrorist organization PKK.

The terrorists invaded NE Syria, a predominantly Sunni Arab area, imposed its Marxist-Leninist ideology on the local population, and exiled or killed anyone that challenged its rule. pic.twitter.com/DTASiXKSnT

"We categorically reject the false equation of Syrian Kurds with the terrorist organization PKK.The terrorists invaded NE Syria, a predominantly Sunni Arab area, imposed its Marxist-Leninist ideology on the local population, and exiled or killed anyone that challenged its rule," he said on Twitter.

"Western governments have been lying to their citizens about Syria," he continued. "The PKK established a 'one-party statelet' with no free press, no dissidents and widespread torture. Hundreds of thousands of Syrian Kurds still live in Turkey, fearing that PKK will kill them if they return."

Western governments have been lying to their citizens about Syria.
The PKK established a 'one-party statelet' with no free press, no dissidents and widespread torture.
Hundreds of thousands of Syrian Kurds still live in Turkey, fearing that PKK will kill them if they return. pic.twitter.com/wk83g18dl1

The Operation Peace Spring, conducted in line with the country's right to self-defense borne out of international law and U.N. Security Council resolutions, aims to establish a terror-free safe zone for Syrians return in the area east of the Euphrates River controlled by the U.S.-backed Syrian Democratic Forces (SDF), which is dominated by YPG terrorists.