Gates denies US pressure on Turkey over missile shield plans 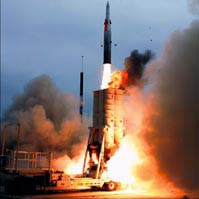 US Secretary of Defense Robert Gates has ruled out the application of any pressure by the United States on its NATO ally Turkey for hosting elements of a planned defense system that is currently being discussed as a NATO issue.

Gates' remarks came in response to a question at a joint press conference with US Secretary of State Hillary Clinton in Brussels on Thursday on the sidelines of the NATO meeting, which gathered foreign and defense ministers of the member states and discussed a proposed anti-missile system that would protect Europe and North America. NATO is proposing to expand an existing system of battlefield missile defense to cover the territory of all alliance members against ballistic missiles from nations such as Iran and North Korea.

"We talked about many subjects with the Turks. Obviously, the approach to an alliance-wide territorial and population missile defense was one of those subjects today that was broadly discussed. I would say that we are not putting pressure on the Turks, but we are having continuing conversations with them as one of our allies," Gates said when asked about Turkish media reports suggesting that "US is putting pressure on Turkey," to host elements of the planned missile defense screen.

Gates was speaking after he and Clinton met with Turkish Foreign Minister Ahmet Davutoğlu and Defense Minister Vecdi Gönül on the sidelines of the summit.

The Turkish side told the US they could endorse plans for an anti-missile system "if the system is NATO-led, covers the entire territory of the NATO members and it is planned in way that would meet security needs for all NATO members," Turkish diplomatic sources told the Anatolia news agency late on Thursday.

In addition to the aforementioned conditions, Ankara fiercely opposes the naming of a particular country as a threat against the alliance while endorsing such a plan.

Ankara's strong opposition to such a move is essentially due to the potential harm to its growing ties with neighbors such as Iran. Over the past decade, Ankara has been proactively engaged in a "zero-problem" policy with its neighbors, the wider Middle East and post-Soviet countries.
-CIHAN-
Last Update: Oct 16, 2010 2:18 pm
RELATED TOPICS