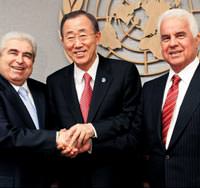 UN Secretary-General Ban Ki-moon has warned that talks to end Cyprus' 36-year division would suffer a major setback unless progress is reached early next year.

NICOSIA, Cyprus - The United Nations chief said in a report released on the island Thursday that peace talks "could founder fatally" without a "substantive agreement" being reached before elections in Cyprus and Turkey are held in mid-2011.

"I fear a critical window of opportunity is rapidly closing," Ban said in his report to the U.N. Security Council. "It is my concern that the political environment in the second quarter of 2011 will likely not be conducive to constructive negotiations."

The Mediterranean island was split into a breakaway Turkish Cypriot north and an internationally recognized Greek Cypriot south in 1974 when Turkey invaded after a coup by supporters of union with Greece.

Cyprus joined the European Union in 2004, but the breakaway north, where Turkey maintains 35,000 troops, has been effectively left out.

In his report, Ban described progress in the UN-backed talks as "frustratingly slow," pointing to a stalemate over the key issue of settling property claims by Greek Cypriots displaced from the north in 1974.

Ban invited rival Cypriot leaders to U.N. headquarters last week in an effort to revive the process. He will meet with them again in Geneva in late January to gauge the chances for a successful outcome — and he has urged the two side to be "fully prepared with a practical plan."

Under the terms of the negotiations, a reunification deal would require approval in separate referendums.

Greek Cypriot government spokesman Stefanos Stefanou, responding to the report, said his government remains committed to work "intensively and constructively" for a breakthrough before the Geneva meeting.