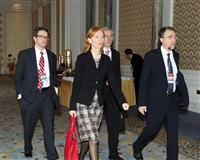 The second day session of negotiations between the UN Security Council’s permanent members and Germany, the P5 +1 and Iran commences today.