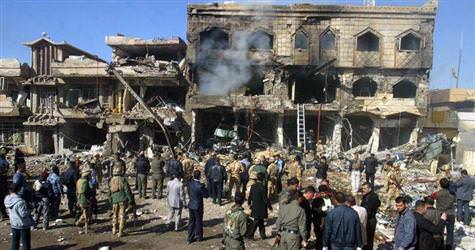 Two of the explosions were aimed at police, in the latest of a series of attacks on police and soldiers by insurgents as U.S. troops prepare to withdraw by the end of this year.

A police source said the first blast wounded an Iraqi police official, while the second was aimed at a police patrol. The third was outside a building used by Kurdish security forces.

"Three car bombs exploded in quick succession. We are on high alert now and fear there may be more car bombs," the source said.

"We've sealed the areas around where the explosions occurred, we are evacuating the wounded and we have intensified searches at checkpoints in other areas to prevent any other car bombs."

Police and hospital sources said six people including three policemen were killed and 75 wounded in the blasts in a residential area of southern Kirkuk, 250 km (155 miles) north of Baghdad.

"We have received six bodies so far from the three blasts, including three policemen's bodies, and we have 75 wounded," a hospital source in Kirkuk said.

A police official said many cars and houses had been badly damaged and firefighters were trying to put out blazes.

While violence in Iraq has declined sharply from the height of sectarian warfare in 2006-07, bombings still occur daily, and Sunni insurgents and Shi'ite militia stage lethal attacks.

"How long will this bad and unstable situation last for? We call on the state and the government of Kirkuk to take tough security measures to prevent such incidents from happening again. The victims are poor people," said Kirkuk resident Ahmed Zebari.

Kirkuk sits on rich oil reserves and is one of the disputed territories at the center of tensions between the Kurdistan Regional Government and Iraq's central government.

Kurds want the city included in their semi-autonomous northern area while Baghdad also lays claim to the region.