Army asserts command as Egypt drifts back to work 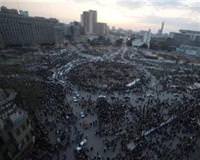 Egypt's generals are asserting their command over the country following the overthrow of President Hosni Mubarak, preparing on Monday to ban strikes and to warn they will act against "chaos and disorder."

Having suspended the constitution and dissolved parliament on Sunday, moves welcomed by those who saw both institutions as perverted to Mubarak's personal ends, the armed forces council was planning, a military source said, to issue orders intended to stifle further disruption and get the country back to work.

Free and fair elections will come, the army said, under a revised constitution -- but it gave no timetable beyond saying that the military would be in charge "for a temporary period of six months or until the end of elections to the upper and lower houses of parliament, and presidential elections."

Nor did it detail what civilian or other participation there would be in amending basic laws during the transition. The cabinet appointed by Mubarak last month will go on governing, submitting legislation to the army chiefs for approval.

Inspired by the success of the 18 days of popular protests which, with the blessing of the army, forced Mubarak to end his 30 years in power on Friday, workers across Egypt have begun to agitate for better deals.

There have been reports of protests, sit-ins and strikes at, in the main, state-owned institutions. These include the stock exchange, textile firms, media organizations, steel firms, the postal service and railways, the police and the health ministry.

The workers cite an array of grievances. What unites them is a new sense of being able to speak out in the post-Mubarak era.

"Finally we have been encouraged to come out and speak," said Hala Fawzi, a 34-year-old mother of two protesting on Sunday outside the offices of the state-owned insurance company where she works for $20 a month. "We want equality," she said.

The army, however, is keen to get Egypt working again. It will be aware of the turmoil still going on in Tunisia, where an uprising that unseated another aging Arab autocrat last month provided the inspiration for Egyptians to take to the streets.

The army source said military authorities would issue an order on Monday that would ban meetings by labor unions or professional syndicates, effectively forbidding strikes, and would tell all Egyptians to get back to work.

There will also be a warning from the military against those who create "chaos and disorder," the source said, adding the army would, however, acknowledge the right to protest.

After three weeks of economic dislocation which has seen tourists flee the pyramids and beaches, and trade and factories facing difficulties, millions of Egyptians are anxious to start earning again in order to survive.

Soldiers scuffled with protesters on Sunday as the authorities let traffic flow through Cairo's Tahrir Square, the focal point of the "revolution on the Nile." Some of the protesters remain camped out, determined to see through their demands for civilian rule and a free, democratic system.

Jihad Laban, an accountant, said much work remained to make sure the revolution did not squander what it had gained.

"The goal was never just to get rid of Mubarak. The system is totally corrupt and we won't go until we see some real reforms," said Jihad Laban, an accountant. "I am going to be buried in Tahrir. I am here for my children."

After six decades underpinning presidents who have all been drawn from its ranks, the army can still draw on deep reserves of public sympathy. That was enhanced by its refusal to join police in attacking demonstrators during the uprising.

However, leaders of the protest movement have warned that they stand ready to demonstrate in force if their demands are not met for a complete change from the old ways. A major "Victory March" is in the planning for this coming Friday.

"The two big questions now are who is going to be on the constitutional committee to redraft (the constitution), and are there any guarantees that what they come up with is then going to be deemed the way ahead," said Rosemary Hollis, professor of Middle East Policy Studies at City University London.

Many opposition figures were pleased with the army's first steps, however. "It is a victory for the revolution," said Ayman Nour, who challenged Mubarak for the presidency in 2005 and was later jailed. "I think this will satisfy the protesters."

They have demanded the release of political prisoners, the lifting of a state of emergency, the abolition of military courts, fair elections and a swift handover to civilian rule.

The army has said it would lift emergency law, used to stifle dissent under Mubarak, when "current circumstances end." But it has not specified a timetable.

"There are still a lot of grey areas, but it is clear that these decisions are opening the door for an entirely new system to come to order," said Hassan Abu Taleb of Cairo's Al-Ahram Center for Political and Strategic Studies.

Any transition to democracy will be fraught with difficulty and old ways of doing things may die hard in a country where the ruling party routinely rigged elections and candidates used bribery, hired thugs and dirty tricks to ensure victory.

Existing registered parties are mostly small, weak and fragmented. The Islamist Muslim Brotherhood, which under the now suspended constitution could not form a party, may be the best organized group, but its true popularity has yet to be tested.

Its strength worries some in the United States, a key backer of Mubarak, as well as in Israel, for which Mubarak's Egypt was an important ally in an otherwise hostile Arab region.

On Saturday, the army said it would uphold Egypt's international obligations. These include a peace treaty with Israel, whose defense minister has been in touch with his Egyptian counterpart, who heads the military council.

As the momentous events in Egypt continued to ripple across the region, demonstrators in Yemen, inspired by protests in Tunisia and Egypt, clashed with police blocking them from marching on Ali Abdullah Saleh's presidential palace.

Prime Minister Ahmed Shafiq said Mubarak was in the Red Sea resort of Sharm el-Sheikh and that the cabinet had not made any request to freeze the deposed president's assets abroad.

A British minister said there should be an international approach to dealing with Mubarak's overseas assets. Many believe he and his family may have billions of dollars worth of assets abroad, which Egyptians may in time try to retrieve.