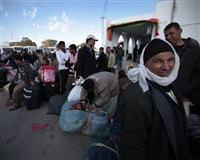 Muammar Gaddafi's grip on Libyan territory was shrinking on Thursday after reports that the area outside his control had expanded from the east and included some towns near the capital.

There are four strategic locations that are likely to hold the key to whether Gaddafi survives or falls: the capital, Gaddafi's desert home town of Sirte to the east, and the Gulf of Sirte oil terminals Ras Lanuf and Marsa el-Brega.

The uprising against Gaddafi in the Cyrenaica region around Libya's second city of Benghazi last week wrested it away from central control, possibly setting the stage for a civil war unless he is toppled first.

"We know that Benghazi ... has basically declared independence from Tripoli," said Peter Zeihan, analyst with the U.S.-based Stratfor think tank.

"If Benghazi can expand down into the Gulf of Sirte ... they've got a very good shot at independence at the least -- or maybe even overturning him at the most -- but if they can't do that, Gaddafi in time will be able to pressure them."

Witnesses in Tripoli told Reuters there was no sign that Gaddafi's forces had lost control there: uniformed police were directing traffic as usual, state television was broadcasting and pro-Gaddafi supporters held a rally in the city.

But there were accounts of police and soldiers vanishing and armed anti-Gaddafi militias patrolling the streets in towns within an hour's drive from the capital.

Egyptian workers who had been based in the town of Zuara, 120 km (75 miles) west of Tripoli, said anti-government militias were now in control there.

"Police stations have been burned and we didn't see any police or army in the past few days," Egyptian laborer Ahmed Osman told Reuters after leaving the town and crossing the border into Tunisia.

In Misrata, 200 km east of Tripoli, a resident told Reuters by telephone the town was under opposition control but that a unit of a paramilitary force controlled by one of Gaddafi's sons was attacking near the city airport. Residents later said a counter-attack had been beaten back by lightly armed rebels.

With foreign journalists able to reach only the area around Benghazi, Internet access blocked and mobile phone links severely restricted, it was impossible to get independent verification of reports from Libya.

But this is the picture emerging from the country of which territory and strategic towns Gaddafi and his security forces control, and which they do not:

-- CYRENAICA REGION. Reuters reporters who entered from Egypt say there is no sign of central control from the Egyptian border to the city of Benghazi, a distance of about 600 km. Local militias are patrolling the streets. Reports suggest the area under their control extends as far west as Ajdabiya, 160 km away on the Mediterranean coast. The Benghazi-based Quryna newspaper, citing a witness, said this week "armed civilians" were controlling the road in and out of Ajdabiya.

-- RAS LANUF AND MARSA EL-BREGA. Libya's oilfields are dispersed around thousands of square kilometers of desert, but much of the 1.6 million barrels of crude a day it usually produces converges at these two ports. Several residents said they were no longer under Gaddafi's control but gave varying accounts of whether or not flows were affected.

-- SIRTE. This town lies on the Mediterranean coast about mid-way between Benghazi and Tripoli. The Sirte region has many oil production facilities, but Sirte's importance now is mainly psychological: this is Gaddafi's home town. Latest indications are that Sirte is under central control with police and soldiers manning checkpoints there.

Gaddafi has transformed Sirte from a dust-blown desert town into a venue for summit conferences. He has built the vast Ouagadougou meeting hall to host them, as well as a marina where members of his entourage keep huge motor yachts. Turkish construction firms are building luxury villas around the marina, and, in an ostentatious display of oil wealth, the streetlights are often left on all day.

-- MISRATA. On the coast about 200 km east of Tripoli, Misrata has a cargo port and a population of several hundred thousand.

-- SABRATHA AND ZAWIYAH. These two coastal towns control the Western access to Tripoli. Quryna reported on Tuesday that the Libyan army deployed a "large number" of soldiers in Sabratha, site of an ancient Roman town, to quell protests, but since then there has been no news. Sabratha's ruins include an amphitheatre and a reconstructed Roman theater where Benito Mussolini watched performances during Italian colonial rule. Zawiyah, just to the east of Sabratha, is the site of an oil refinery. A Tunisian electrical engineer who crossed the border on Thursday to return home told Reuters there was a big military presence in the town. There was fighting in Zawiyah on Thursday and media reports put the death toll at between 23 and 100.

-- THE SOUTH. A vast and mostly unpopulated expanse of desert, but home to traditional tribes which will play a crucial role in determining how Libya's crisis unfolds. Facebook reports described clashes in Garyan, about 100 km south of Tripoli, but it was not possible to verify this. There was no information from Ghadames, next to the Algerian border, which is the site of major oil fields. Sabha, deep in the south, is likely to remain loyal to Gaddafi for now. It is the historic home of his own tribe, the Gadhdhfa, the second-largest tribal group in Libya.