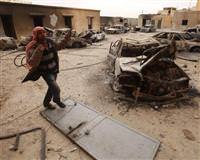 World leaders condemned Muammar Gaddafi's bloody crackdown on a revolt that has split Libya, but took little action to halt the bloodshed from the latest upheaval reshaping the Arab world.

U.S. President Barack Obama made his first public comments, condemning as "outrageous" and "unacceptable" attacks on protesters that have killed hundreds in 10 days and helped drive oil prices to levels that threaten global economic recovery.

Yet there seemed little cohesion and urgency in a global response, even as Washington and Brussels spoke of possible sanctions against a man whose 41 years in power have been marked by idiosyncratic defiance of the West.

"It is imperative that the nations and peoples of the world speak with one voice," Obama said. "The suffering and bloodshed is outrageous."

The oil exports which Gaddafi used to help end his isolation in the past decade have given him means to resist the fate of his immediate neighbours, the presidents of Tunisia and Egypt, who were brought down by popular unrest in the past few weeks.

As many as 1,000 people may have been killed in Libya, the Italian foreign minister said. Unconfirmed reports spoke of troops and African mercenaries firing on demonstrators in the desert nation pumping nearly two per cent of the world's oil output.

Gaddafi's defiance has been backed by the deployment of aircraft on bombing runs and his forces appeared to be in control of the west of the sprawling desert nation.

Eastern areas where much of the oil is concentrated have slipped from his control and with security forces defecting to join the protesters, it was unclear just how long Gaddafi could hang on to power.

Thousands of foreigners - from doctors to oil contractors - fled Libya through its ports and borders in mass emergency evacuations. A British worker appealed to London to rescue dozens of Britons in oil camps stranded in the desert, saying armed villagers had stolen their cars and supplies.

In cities like Benghazi and Tobruk, troops and police have either withdrawn or have joined with diffuse and disparate opposition groups to start providing some order and services.

That wave may have reached as far west as Misrata, a city 200 km (120 miles) east of Tripoli where a statement which was purported to be from lawyers and judges said "honest" military officers had helped remove agents of the "oppressive regime".

In Tripoli, which remains largely closed to foreign media, locals said streets were calm but that they were too scared to go outside for fear of being shot by pro-government forces.

"I haven't heard gun shots, unlike in the last few days," said one resident living close to Green Square in the city centre which is a focus for gatherings.

He said Gaddafi supporters had gathered in the square. "They are mostly young men, but there were some older women too."

Marwan Mohammed, a Tunisian crossing the border home after leaving Tripoli, said: "Lots of people are afraid to leave their homes in Tripoli and pro-Gaddafi gunmen are roaming around threatening any people who gather in groups."

Oil wealth has made Libya - a thinly populated country stretching from the Mediterranean deep into the Sahara - an important investor in Western economies and won Gaddafi potential allies in forums like the United Nations.

Differences among world powers over how to proceed, some driven by concern not to jeopardise the safety of foreigners caught up in the trouble, appear to limit prospects for immediate international action.

The Security Council agreed on a statement on Tuesday calling for an end to violence. But diplomats said a formal resolution requiring U.N. action was not immediately likely.

France and Germany have pushed EU states to consider sanctions and have won agreement to look into the matter. Some governments, including Italy, warn of economic problems if oil and gas supplies are disrupted.

Gaddafi, who has ruled Libya with a mixture of populism and tight control since taking power in a military coup in 1969, has promised to "cleanse Libya house by house" to crush the revolt.

He has deployed troops to the west of the capital to stop the revolt that started in the east from spreading. In the east, many soldiers have withdrawn from active service.

In Benghazi, cradle of the uprising and home to tribes long hostile to Gaddafi, thousands filled the streets, lighting fireworks and waving the red, black and green flag of the king Colonel Gaddafi overthrew in 1969.

"We have been suffering for 41 years," said 45-year-old Hamida Muftah. "Gaddafi has killed people ... We are a very rich country, but most of the people are poorer than poor".

A medical official said some 320 had died in Benghazi alone since protests against oppression and poverty began last week.

Libya's Quryna newspaper quoted a military source as saying a bomber crew bailed out and left their aircraft to crash rather than bomb Benghazi. Earlier in the week, two pilots flew their jets to Malta to avoid, they said, attacking their own people.

The newspaper said rebels in Benghazi started their own publication with the slogan "We don't surrender, we either win or die" - the last words of Omar al-Mukhtar, the leader of the movement against Italian rule, before his execution by Italian authorities in 1931.

Gaddafi's children have spoken up in his defence and accused foreign media of misreporting the week's events in Libya.

"Libyans are the victims of the biggest joke," his son, Saif al-Islam, told state TV. Gaddafi's daughter, Aisha, appeared on state television, denying a report she had tried to flee to Malta.

An estimated 1.5 million foreign nationals are working or travelling in Libya and a third of the population of seven million are immigrants from sub-Saharan Africa.

Some 3,000 Turks fled the country on ferry boats escorted by a Turkish frigate, relieved to have fled the violence in Benghazi where they had found sanctuary in a soccer stadium.

"The soldiers were using us as hostages. They refused to give us any food and were confiscating the food given to us by the Turkish embassy," one Turk, Ahmet Yucel, told Reuters.

A British oil worker said 300 people were stranded at a camp in eastern Libya. He told the BBC: "We are living every day in fear of our lives as the local people are armed."