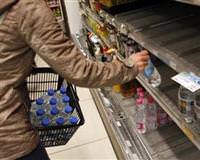 Stores in Tokyo were running out of bottled water on Thursday after radiation from a damaged nuclear complex briefly made tap water unsafe for babies, while more nations curbed imports of Japanese food.

Engineers are trying to stabilize a six-reactor nuclear plant in Fukushima, 250 km (150 miles) north of the capital, nearly two weeks after an earthquake and tsunami battered the plant and devastated northeastern Japan, leaving nearly 26,000 people dead or missing.

Tokyo's 13 million residents were told not to give tap water to babies under 1 year old after contamination hit twice the safety level this week. But it dropped back to allowable amounts on Thursday.

Despite government appeals against panic, many supermarkets and stores sold out of bottled water.

"Customers ask us for water. But there's nothing we can do," said Masayoshi Kasahara, a store clerk at a supermarket in a residential area of eastern Tokyo. "We are asking for more deliveries but we don't know when the next shipment will come."

Radiation above safety levels has also been found in milk and vegetables from Fukushima, where the stricken nuclear plant is located on the Pacific coast.

Singapore and Australia joined the United States and Hong Kong in restricting food and milk imports from the zone, while Canada became the latest of many nations to tighten screening after the world's worst nuclear crisis since Chernobyl.

A shipping industry official, meanwhile, said some merchant vessels may be avoiding Tokyo port due to concerns that crew members may be exposed to radiation.

Radiation particles have been found as far away as Iceland, although Japan insists levels are not dangerous to adults.

The contamination scare after the catastrophe of March 11 is adding to Japan's most testing time since World War Two.

The estimated $300 billion damage from the 9.0 magnitude earthquake and ensuing tsunami makes it the world's costliest natural disaster, dwarfing Japan's 1995 Kobe quake and Hurricane Katrina, which swept through New Orleans in 2005.

In Japan's devastated north, more than a quarter of a million people are in shelters. Some elderly refugees, among an aging population, have died from cold and lack of medicines.

Exhausted and traumatized rescuers are still sifting through the mud and wreckage where towns and villages once stood.

The official death toll from the disaster has risen to 9,523, but is bound to rise as 16,094 people are still missing.

Amid the suffering, though, there was a sense that Japan was turning the corner in its humanitarian crisis. Aid flowed to refugees, and phone, electricity, postal and bank services began returning to the north, sometimes by makeshift means.

"Things are getting much better," said 57-year-old Tsutomu Hirayama, staying with his family at an evacuation center in Ofunato. "For the first two or three days, we had only one rice ball and water for each meal. I thought, how long is this going to go on? Now we get lots of food, it's almost like luxury."

In other cheering news, a baby dolphin was rescued in a rice field after the tsunami dumped it there. Locals wrapped it in wet towels before taking it back to the sea.

Aftershocks are still coming, though, sending shudders through many Japanese. Several shook Tokyo on Thursday.

At the Fukushima plant, where the worst nuclear drama since Chernobyl in 1986 is playing out, technicians have successfully attached power cables to all six reactors and started a pump at one to cool overheating fuel rods.

Nearly 300 engineers, fast becoming national heroes for braving danger inside an evacuation zone, are fighting to cool fuel rods at the plant's reactors.

They resumed work on Thursday at the No.3 reactor, considered the most critical, after a one-day suspension when black smoke was seen rising.

Three TEPCO employees who were working in water to connect a cable were injured by radiation on Thursday and two were taken to hospital with burns, the nuclear safety agency said.

Japan urged the world not to overreact to the radiation precautions, and plenty of experts appeared to back that up.

Jim Smith, of Britain's University of Portsmouth, said the finding of 210 becquerels of radioactive iodine, twice the safety limit, at a Tokyo water purification plant on Wednesday should not be cause for panic. The safety level for adults is 300 becquerels.

"The recommendation that infants are not given tap water is a sensible precaution. But it should be emphasized that the limit is set at allow level to ensure that consumption at that level is safe over a fairly long period of time," he said.

"This means that consumption of small amounts of tap water -- a few liters, say-- at twice the recommended limit would not present a significant health risk."

Tokyo metropolitan government said it would access extra bottled water from stockpiles, but could not say for how long, and had plans to send nearly quarter of a million bottles to the capital's satellite cities.

Philippine Airlines said it was airlifting a donation of 27 tonnes, or 70,000 bottles, of water. The cargo is the first batch of a total 700,000 bottles of 350 ml each donated by sister company Asia Brewery Inc.

The crisis in the world's third-biggest economy -- and its key position in global supply chains, especially for the automobile and technology sectors -- has added to jitters in global financial markets, also worried by conflict in Libya and Middle East protests.

Toyota Motor Corp, which has suspended production at all of its 12 assembly plants in Japan, said it would slow some North American production because of supply problems although it would try to minimize disruptions.