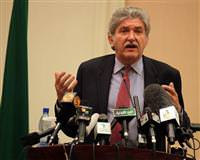 The Red Cross said on Monday it was opening an office in Tripoli at the invitation of the Libyan government and would soon send a team to the besieged city of Misrata to help civilians trapped by the fighting.

The International Committee of the Red Cross (ICRC) is already deployed in Libya's rebel-held eastern territory, where it has supplied hospitals, distributed food and visited government soldiers captured during the conflict.

Speaking in Tripoli alongside a Libyan government spokesman, the ICRC's regional head Jean-Michel Monod said his team had been officially invited to Tripoli about 10 days ago.

"Now we will officially be here open for business," he told reporters. "Of course it was high time as a neutral, impartial and independent humanitarian organisation that the ICRC would come here as well to conduct discussions with the authorities."

Aid agencies have been trying to reach civilians in western Libya, including Misrata, where people face shortages of basic foodstuffs, medical supplies, water and electricity.

"I encourage all parties, all fighters to respect the very basic principles laid down in international humanitarian law," he said.

A day earlier, African mediators said the Libyan leader had accepted a peace plan which included a cease-fire and a provision under which the Libyan authorities are required to facilitate humanitarian efforts.

But as Monod spoke in Tripoli, rebels in Misrata said forces loyal to Muammar Gaddafi were still firing rockets on the city and fighting intense house-to-house battles.

Over the weekend, the Red Cross said a ship carrying medical supplies had docked in Misrata. Monod said he hoped to send another team there as soon as possible to assess the situation.

He added that a Turkish ship near Misrata was ready to help evacuate migrant workers stranded there by the fighting.

"One boat is not enough. I hope other boats either from Turkey, Egypt or from Greece will come soon and take these people out," he said.

"The situation of the local population in Misrata should be addressed as well. We will go, I cannot give you an exact date, but as soon as possible, to Misrata to have a direct and better evaluation."

Misrata, 200 km (130 miles) east of Tripoli, has been subjected to weeks of shelling and sniper fire, steadily forcing the rebels back into a shrinking area of the city, rebels say.


It also denies statements by Misrata residents that the government has cut off electricity and water supplies to the city, and says it is doing everything to help civilians.

Mussa Ibrahim, the government spokesman, said Libya welcomed the ICRC's arrival and would help it with its work.

"In Misrata, the Libyan government has done a wonderful (job)," he said. "We have helped evacuate tens of thousands of people. We moved them to other cities, we provided them with food and medicine.

"We insist, and this is our position, that whatever damage that was caused in Misrata was the result of people taking up arms against the legitimate government of Libya, causing chaos and death in the streets in Misrata."