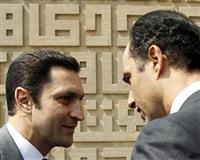 Egypt's former ruling elite is having a taste of what they meted out to their enemies.

The pillars of former president Hosni Mubarak's regime and his two sons are now locked up in prison in an unprecedented settling of accounts with the former autocrat's government.

Mubarak, overthrown in a popular uprising on February 11, would have joined the string of VIP detainees except that the health of the 82-year-old former president is reckoned too precarious.

It is a stunning turn of events for Egyptians, even those who have gotten used to seeing the unthinkable happen after 30 years of political sclerosis under Mubarak, who protesters blamed for the deep rich-poor divide and rampant corruption.

"Never would I have ever dreamed of this. Mubarak being ousted is one thing, but nobody in Egypt would have imagined for a fraction of a second that the entire old regime would end up in jail," said Salma Shafei, a 34-year-old architect.

Many former top officials and elite business executives, who Egyptians had long thought of as above the law because of their power and wealth, are now under the gaze of watch towers behind the prison's high walls.

They have been ordered into temporary detention in probes ranging from graft and abusing power to killing of protesters. More than 380 were killed in demonstrations to oust Mubarak.

The latest visitors are Gamal and Alaa Mubarak, sons of the former president, whisked from the glitzy Red Sea resort of Sharm el-Sheikh on Wednesday to the prison. Gamal, 47, a top party official, was once seen as being groomed for president.

Torah, made of interconnected H-blocks in a dusty plot on the edge of a well-to-do Cairo suburb, houses the largest prison section in Cairo for crimes related to abuse of public funds. Other criminals and political prisoners were also held there.

The army, which has ruled Egypt since the president was tossed out of office, has been eager to appease protesters who demanded they hurry to weed out the corruption of Mubarak's era.

Even Mubarak, 82, has been detained for 15 days in a probe over graft and the killing of protesters. For now he is at a hospital in Sharm el-Sheikh. State television said he had been ordered to appear in a Cairo court for questioning next week.

Mubarak has dismissed allegations against him as "lies."

The vanquishing of government elite has been a welcome turning of the tables for those held in Torah under Mubarak.

Badr Mohamed Badr, a member of the Muslim Brotherhood that was banned under Mubarak and whose activists were frequently rounded up without charge, was one of those thrown into Torah jail when his wife ran in the 2010 parliament election.


Now the man he blames for ordering him into prison, former Interior Ministry Habib Adli, is among those inside.

"I suffered physically and psychologically in the car that took me to Torah," said Badr. "I felt better when I learnt that Habib al-Adli was driven in that car and surely suffered as I did and as the others he jailed did."

The man who protesters reviled after police beat, tear-gassed and fired rubber bullets at them is shown in footage on the Web being hauled into detention by officers.

Those detained include the secretary-general of Mubarak's ruling party, Safwat Sherif, seen as one of Mubarak's closest aides, and former presidential chief of staff, Zakaria Azmi.

Ahmed Ezz, a steel magnate and top party official, is also being held. He was blamed by protesters for rigging the 2010 parliamentary elections when the opposition was almost completely wiped out of the assembly. He denies the charge.

The ex-prime minister, Ahmed Nazif, is held inside along with the ministers of tourism and housing.

"How the mighty have fallen," read a newspaper headline in al-Ahram Weekly. "Ex-PM Nazif meets with his ministers at Torah prison for important talks," wrote another newspaper.

"The team of ministers and businessmen at Torah prison have formed a sports team to play football and exercise during 'exercise hour'," al-Dostour newspaper reported.

Torah has become the butt of jokes for many ordinary Egyptians. The prison has been popularly referred to as "Porto Torah," punning the name of the well-known "Porto" resort chain.

"The way I see the Torah prison scenario is that its extremely humbling," said Raga Mahmoud, a 35-year-old marketing executive. "It makes one respect the people who went out on the streets on January 25," the start of protests against Mubarak.