Belief in a supreme being strong worldwide 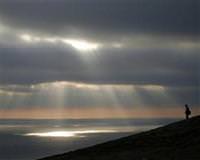 Belief in a god, or a supreme being, and some sort of afterlife is strong in many countries around the globe, according to a new Ipsos/Reuters poll.

Fifty one percent of the 18,829 people across 23 countries who took part in the survey said they were convinced there is an afterlife and a divine entity, while 18 percent said they don't believe in a god and 17 percent weren't sure.

But only 28 percent believe in creationism, the belief that a god created humans, compared to 41 percent who believe in human evolution and 31 percent who simply don't know what to believe.

"It may seem to many that we live in a secular world but this survey shows just how important spiritual life is to so many global citizens with half saying they believe in a spiritual being and the same proportion in an afterlife of some sort or other," said Bobby Duffy, the London-based managing director of the Social Research Institute at Ipsos.

"The other really interesting thing is that such a large proportion of the remaining people are just not sure there is a spiritual explanation either for how they got here or what happens after they die."

Indonesia, Turkey and Brazil had the highest proportion of people with a definitive belief in a god, or supreme being, while 24 percent of residents of India, 14 percent of Chinese and 10 percent of Russians were most likely to believe in many gods.

At the other end of the spectrum, among those who said they do not believe in a god or supreme being nearly 40 percent were most likely to live in France, followed by Sweden, Belgium and Britain.

Although half of the people questioned in the poll think there is something after death, nearly a quarter do not believe it will be a heaven or hell. Seven percent think "you are ultimately reincarnated" and two percent believe in the concept of heaven but not hell.

Mexicans were the most likely to accept the idea of an afterlife, but not heaven or hell, followed by Russians, Brazilians, Indians, Canadians and Argentines.

The belief in reincarnation was strongest in Hungary.

Of people who believed in reincarnation 13 percent were from Hungary, while Swedes made up the biggest proportion of people who said they don't know what happens after death. South Korea and Spain had the highest percentage of people who thought "you simply cease to exist."

"There is a belief on one side (in a supreme being) but there is a lot of uncertainty on the other," said Duffy, referring to what happens after death.

"The nature of these questions and issues is that in many cases they are unknowable. But it reminds us that it is the case with many people around the world."

Believers in creationism were strongest in South Africa, followed by the United States, Indonesia, South Korea and Brazil.