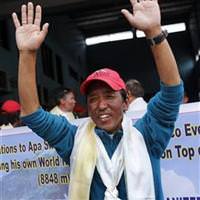 A 51-year-old Nepali mountaineer, nicknamed "Super Sherpa", climbed Mount Everest for a record 21st time on Wednesday, breaking his own record for the most summits of the world's highest mountain, hiking officials said.

Apa Sherpa, who lives in the United States, reached the 8,850-meter (29,035-foot) peak of the mountain along the Southeast Ridge route, pioneered by New Zealand's Sir Edmund Hillary and Sherpa Tenzing Norgay, who were the first to reach the top of the world in 1953.

"It takes a lot of will power to do something as difficult and needing a lot of strength at very high altitude over and over and over again," climbing historian Elizabeth Hawley said. "It is really a remarkable achievement."

Apa, whose 21st ascent was dedicated to the impact of climate change, was accompanied by American Chris Shumate, Bruno Gremior of Switzerland and four other Sherpa climbers, Ang Tshering Sherpa, chief of the Asian Trekking Agency, said.

Environmental activists say the Himalayan glaciers are rapidly shrinking due to climate change, threatening the lives of millions of people who depend on them for water.

Apa's Eco Everest Expedition team is made from climbers from different countries that set out to pick about five tonnes of decades-old old garbage - discarded oxygen cylinders, gas canisters, torn tents, ropes and plastic dumped by climbers on the mountain's slopes in the past.

"This expedition is focused on climbing in an eco-sensitive manner to keep Everest clean and collect garbage, debris and waste left by past expedition groups," team leader Dawa Steven Sherpa said.

Apa first climbed the summit of Everest in 1990. He was born in Solukhumbhu district, home to Everest, but now lives in Salt Lake City, Utah.

Hundreds of climbers are on Everest during the current March-May climbing season to try to reach the top from the Nepali and Tibetan sides of the mountain.

More than 3,100 climbers have made at least 5,100 ascents of Mount Everest since Hillary and Norgay.