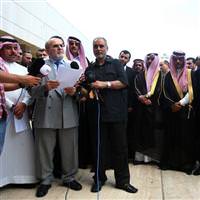 Syrian President Bashar al-Assad must step down to pave the way for democracy after an uprising against his rule showed he had lost legitimacy, the country's opposition in exile said on Wednesday.

Rights groups say 1,000 civilians have been killed in a military crackdown as Assad seeks to crush a revolt which has turned into the gravest challenge to his 11-year rule.

The severity of the crackdown has provoked international condemnation and sanctions.

"The revolution inside Syria has declared 'the people want the overthrow of the regime'. We echo it. The price of the blood being shed can only be freedom," Abdelrazzaq Eid, a senior figure in the Damascus Declaration umbrella opposition group, told the conference in the Turkish coastal city of Antalya.

The gathering is the first official meeting of activists and opposition figures in exile since protests erupted 10 weeks ago in Deraa, a poor, agricultural city in the southern Hauran Plain.

"The dictatorship has presented nothing to show a modicum of good intentions. It has lost any legitimacy by firing at and killing its own people," Eid said, to the applause of delegates.

Syrian authorities blame armed groups, backed by Islamists and foreign agitators, for the unrest and say more than 120 police and soldiers have been killed.

A regional Middle East player, Assad has sought since succeeding his father in 2000 to maintain Syria as an ally of Iran and supporter of militant groups Hamas and Hezbollah while seeking better ties with the West and peace with Israel.

But Assad's handling of the protests has triggered U.S. and EU sanctions on members of the ruling hierarchy, including himself, after four years of detente with the West. Syria's backer Turkey has also begun to criticize Assad.

The gathering brought together a broad spectrum of opposition figures driven abroad over the last 30 years, from Islamists crushed in the 1980s to Christians escaping repression.

Delegates said an ultra-loyalist army core controlled by Assad's brother Maher, and a security apparatus which has suppressed dissent for decades, were preventing Damascus and Syria's biggest city Aleppo from joining the demonstrations.

But they said international pressure and a series of gruesome killings have turned Syrian public opinion against the 45-year-old leader, pointing to a slow but steady expansion of demonstrations, despite an intensified military crackdown.

"I am afraid there will be more sacrifices before Assad goes, but this is the nature of revolutions," said Naim al-Salamat, a researcher who lives in Ireland.

Assad has issued decrees aimed at appeasing public grievances. The opposition say they would not change the nature of a repressive political system in which arbitrary arrests, beatings and torture of political detainees are common.

State news agency SANA said on Wednesday Assad ordered the formation of a committee tasked with setting the framework for a national dialogue.

On Tuesday he announced an amnesty for political prisoners, but rights campaigners said the decree had numerous exceptions, specifying reduced sentences for many cases rather than release.

"Bashar al-Assad will be the one in need of an amnesty," said Mulhem Droubi, a Muslim Brotherhood leader.