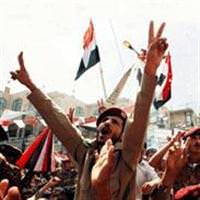 Yemeni President Ali Abdullah Saleh was recovering from an operation in Saudi Arabia to remove shrapnel from his chest while a truce between his troops and a tribal federation appeared to be holding.

Protesters, interpreting Saleh's absence as a sign that his grip on power was weakening, celebrated on the streets of Sanaa where they have been staging anti-government demonstrations since January.

"Who is next?," asked one banner held up by a protesters in a sea of red, white and black Yemeni flags, referring to the wave of uprisings in Arab world that has seen the leaders of Tunisia and Egypt toppled and inspired uprisings elsewhere.

Saleh was wounded on Friday when a rocket was fired into his presidential palace in Sanaa, killing seven others and injuring his closest advisers. He is being treated in a Riyadh hospital.

He left as acting president Abd-Rabbu Mansour Hadi, the vice president who is seen by many as having little power. Leaving Yemen at a time of such instability, even for medical care, could make it hard for Saleh to retain power.

Early on Monday, a truce between troops loyal to Saleh and the Ahmar group, leader of Yemen's Hashed tribal federation, appeared to be holding, offering some respite after two weeks of fighting in the capital in which more than 200 people have been killed.

Key in the coming days will be any news of Saleh's condition and any signals from Saudi Arabia on whether he will be able to return to Yemen -- or whether Riyadh will apply pressure on Saleh to step down.

Saleh, a political survivor who has ruled the impoverished country at the tip of the Arabian Peninsula for nearly 33 years, had so far managed to remain despite the defection of his top generals and ambassadors.

Saleh has exasperated his former U.S. and Saudi allies, who once saw him as a key partner in efforts to combat Yemen-based al Qaeda in the Arabian Peninsula, by repeatedly reneging on a Gulf-brokered deal for him to quit in return for immunity.

"The kingdom (Saudi Arabia) will convince Saleh to agree to the Gulf-brokered exit so that the situation can be resolved peacefully and without bloodshed," said Saudi analyst Abdulaziz Kasem.

Saleh's fall could also give renewed impetus to protest movements around the region.

"The departure of Saleh is a turning point not just for the Yemeni revolution but also is a huge push for the current changes in the Arab region and is the start of the real victory," said Zaki Bani Rusheid, a leading figure in Jordan's Muslim Brotherhood.

Egyptian political scientist Hassan Nafaa agreed: "The 'Arab Spring' will continue, Arab people are in a state of total rejection of their current ruling systems."