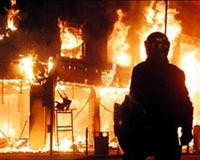 Groups of youths attacked shops and damaged a police car in north London on Sunday as police sent in reinforcements to prevent more rioting on the scale that laid waste to another area of the British capital 24 hours earlier.

Scattered incidents broke out on Sunday evening in Enfield, a few miles north of the deprived London neighborhood of Tottenham, which was hit by some of the worst riots seen in London for years on Saturday night after a protest over the fatal shooting of a man by armed police a few days earlier turned violent.

Police Commander Christine Jones said the police had "extra resources" on duty across the capital on Sunday.

"Anyone else who thinks they can use the events from last night as an excuse to commit crime will be met by a robust response from us." she said in a statement.

Three shops were damaged, and two of them looted, in Enfield and the rear window of a police car was smashed, police said, adding that several people had been arrested.

Local pharmacist Dipak Shah told the BBC he and his brother had barricaded themselves in their shop after 15 youths smashed the window and tried to break in.

"It was very threatening. It felt as though they could have actually killed or maimed somebody," he said.

A Reuters photographer at the scene said a jeweler's shop window was broken but that riot police had flooded the center of the suburb and youths, who had earlier hurled missiles at police, had dispersed.

Amid rumors there could be more flare-ups on Sunday, police Commander Adrian Hanstock told Reuters there was "a lot of ill-informed and inaccurate speculation on social media sites" that could inflame the situation.

In Tottenham, an area with large numbers of ethnic minorities and high unemployment, workers began cleaning up shops trashed by looters and police sealed off a main street to investigate crime scenes after rioters throwing petrol bombs set fire to police patrol cars, buildings and a double-decker bus.

Politicians and police blamed the violence on criminal thugs but residents attributed it to local tensions and anger over hardship.

Police said 26 officers had been injured as rioters bombarded them with missiles and bottles, looted buildings including banks, shops and council offices, and torched three patrol cars near Tottenham police station.

Residents said they had to flee their homes as mounted police and riot officers on foot charged the crowd to push rioters back.

The Metropolitan Police, which will handle next year's London Olympic Games in what is expected to be Britain's biggest peacetime police operation, faced questions about how the trouble had been allowed to escalate.

The disturbance was finally brought under control on Sunday. Buildings were still smoldering, bricks littered the roads and burglar alarms continued to ring out.

At a nearby retail park, electrical stores and mobile phone shops had been ransacked, with boxes for large plasma TVs discarded outside, along with CDs and glass from smashed windows. "They have taken almost everything," said Saad Kamal, 27, branch manager of retailer JD Sports. "Whatever is left is damaged."

Local MP David Lammy said it was not known if everyone had escaped flats above shops that were gutted by fire. "A community that was already hurting has now had the heart ripped out of it," he told reporters.

Police and community leaders said local people had been horrified by what happened and appealed for calm.

The trouble broke out on Saturday night following the peaceful demonstration over the shooting of Mark Duggan, 29, who was killed after what was reported to be an exchange of gunfire with police on Thursday. Duggan's death is now being investigated by the independent police watchdog.

The riots come amid deepening gloom in Britain, with the economy struggling to grow while the government is imposing deep public spending cuts and tax rises brought into help eliminate a budget deficit which peaked at more than 10 percent of GDP.

"Tottenham is a deprived area. Unemployment is very, very high ... they are frustrated," said Uzodinma Wigwe, 49, who was made redundant from his job as a cleaner recently.

Tottenham includes areas with the highest unemployment rates in London. It also has a history of racial tension with local young people, especially blacks, resenting police behavior including the use of stop and search powers.

The disorder was close to where one of Britain's most notorious race riots occurred in 1985, when police officer Keith Blakelock was hacked to death on the deprived Broadwater Farm housing estate during widespread disturbances.

Locals said there had been growing anger recently about police behavior. "I've lived in Broadwater Farm for 20 odd years and from day one, police always pre-judge Turks and black people," said a 23-year-old community worker of Turkish origin who would not give his name.

Fingers were also pointed at the police for failing to anticipate the trouble, although Commander Hanstock said there had been no hint of what was coming. He said they expected to add to the 55 people already arrested.

The London force has been heavily criticized for its handling of recent large protests against austerity measures, while its chief and the top counter-terrorism officer have quit over the handling of the News Corp phone-hacking scandal.

"I'm concerned that what was peaceful protest ... turned into this and it seemed to go on for many hours before we saw the kind of policing that I think is appropriate," Lammy said.

Politicians said criminals and thugs, rather than those with genuine grievances, had taken advantage of the situation.

"The rioting in Tottenham last night was utterly unacceptable," a spokesman for Prime Minister David Cameron said. "There is no justification for the aggression the police and the public faced, or for the damage to property."

The capital also saw riots at the end of last year when protests against government plans to raise tuition fees for university students in the center of London turned violent.

During the most serious disturbances last December, rioters targeted the limousine belonging to heir-to-the-throne Prince Charles and his wife Camilla.