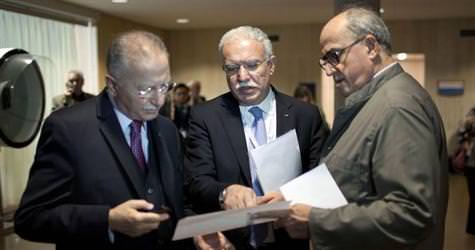 The United Nations' cultural agency granted the Palestinians full membership on Monday, a step forward in their long-running efforts to achieve recognition before the world as an independent state.

A huge cheer erupted in UNESCO's General Assembly after the vote, which marks a symbolic victory for Palestinians in the complex diplomacy that surrounds their collective status and relations with foreign powers.

"Today's victory at UNESCO is the beginning of a road that is difficult, but will lead to the freedom of our land and people from occupation," Palestinian Foreign Minister Riad Malki said. "Palestine has the right to a place on the map."

Israel called the vote a "tragedy" and the decision damaged relations between UNESCO and the United States, an ally of Israel that provides about 22 percent of the body's funding, or some $70 million.

Legislation stipulates that the U.S. can cut off funding to any United Nations agency that accepts Palestinians as a member.

The White House said the vote was "premature" and would not aid peace and the U.S. ambassador to the United Nations said UNESCO would suffer.

"Today's vote to grant Palestinian membership in UNESCO is no substitute for direct negotiations, but it is deeply damaging to UNESCO," said Ambassador Susan Rice.

UNESCO director-general Irina Bokova, who previously pleaded for Washington not to withdraw support, told delegates funding may be jeopardized.

"I believe it is the responsibility of all of us to make sure that UNESCO does not suffer unduly... We need each and every member of this organization to be fully engaged," she added.

The Palestinians got backing from two thirds of UNESCO's members to become its 195th member. Of 173 countries that voted from a possible 185, 107 voted in favor, 14 voted against, 52 abstained and 12 were absent. Abstentions did not count toward the final tally.

The Palestinians went to UNESCO after making a bid for recognition of the over-arching United Nations system in September before the U.N. Security Council, which has moved the issue to a committee where it is likely to run into a veto from the United States.

"This vote is not directed against anyone, but represents support for freedom and justice," Palestinian President Mahmoud Abbas said in a statement to the official news agency WAFA.

"This vote is for the sake of peace and represents international consensus on support for the legitimate Palestinian national rights of our people, the foremost of which is the establishment of its independent state."

But the breakdown of the vote reflected deep divergences in international views on Palestinian statehood.

For the European Union, which has stumbled in recent efforts to develop a common foreign policy, the UNESCO vote highlighted persistent rifts with some member states voting for and some against Palestinian membership.

Austrian UNESCO ambassador Ursula Plassnik, whose country voted in favor, said she regretted that the EU had failed to arrive at a common position on Palestinian membership.

France, which previously abstained from a vote on the subject of Palestinian membership in UNESCO, broke with precedent to vote in favor on Monday.

"Since it has been raised today, we must assume our responsibilities and respond to the substance of the issue ... On the substance, France says "yes"- Palestine has the right to become a member of UNESCO," said Hubert de Canson, France's representative at UNESCO.

Israel has said the Palestinian bid would amount to politicization of UNESCO that would undermine its ability to carry out its mandate. It said on Monday it would reconsider its cooperation with the agency.

"We regret that the organization of science has opted to adopt a resolution which is a resolution of science fiction," said Nimrod Barkan, Israel's ambassador to UNESCO, who called the move a tragedy for the agency. "There is no Palestinian state and therefore one should not have been admitted today."

The Israeli foreign ministry said the vote placed unnecessary obstacles on the road to renewing negotiations.

"This is a unilateral Palestinian maneuver which will bring no change on the ground but further removes the possibility for a peace agreement," it said in a statement.