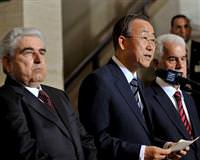 U.N. chief Ban Ki-moon will attempt to throw a lifeline to flagging Cyprus peace talks on Sunday, calling a two-day meeting with its rival leaders to end a deadlock in a dispute harming Turkey's EU entry bid and energy projects in the eastern Mediterranean.

Cyprus, with a combined population of around one million people, was divided in 1974 triggered by a brief Greek inspired coup. The conflict, a significant source of tension between NATO allies Greece and Turkey, is thrown into sharper focus by Ankara's attempts to join the EU and a simmering dispute over Mediterranean hydrocarbon riches.

Switching from the normal abode of peace talks at an abandoned airport compound on the scorchingly hot island to a secluded woodlands retreat blanketed by snow on Long Island, the United Nations is hoping the consultations will end a logjam and pave the way forward in a conflict which has long defied mediation.

"We will use this meeting for them to make their case that they have a way to solve divergences on core issues, that this is not a complete deadlock," said a diplomat close to the process.

Ban's stated intention when calling the meeting last July 7, that of reporting agreement on outstanding issues, has not materialized. He was likely to give them more time to resolve differences, diplomats said.

Cyprus's reunification process has stumbled on complex issues such as future co-governance under a federal system, an issue one source said was on the agenda of the two-day meeting.

Both communities now run their affairs - Greek Cypriots as the official representatives of the whole of Cyprus and Turkish Cypriots, whose self-governing enclave is not internationally recognized.

Although festering for years, diplomats say they want a deal by the time Cyprus assumes the EU presidency in July 2012, worried that Turkey will sever already troubled ties altogether with the bloc. Ankara does not have diplomatic relations with Cyprus's internationally recognized Greek Cypriot government, which represents the whole island in the EU.

Ankara also opposes attempts by Greek Cypriots to drill for gas south of the island, saying it risks derailing the peace process. U.S. based Noble Energy started drilling for natural gas south of Cyprus in September and Cypriot officials say there are encouraging indications of large gas deposits.

Ban was due to spend several hours with Eroglu and Christofias at the secluded Greentree Estate on Long Island on Sunday and Monday. A team led by U.N. envoy Alexander Downer was to hold proximity talks with the delegates for the rest of the time, a source familiar with consultations said.

The sides agree in principle on reunifying the island as a two-zone federation with a strong central government, but on little else. There are deep rooted disputes on governance, particularly focused on how future leaders will be elected and by whom, property rights of thousands of internally displaced people and redrawing territorial boundaries between the two sides.