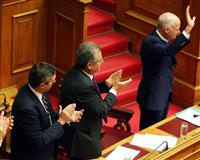 Greek parliamentarians prepared to give their verdict on Prime Minister George Papandreou on Friday in a confidence vote which could decide the fate of both the nation's European bailout deal and the global economy.

After intense pressure from European leaders, the government confirmed it had dropped plans to hold a referendum on the bailout package, which had threatened an immediate crisis in the euro zone and cast doubt on Greece's membership.

But the future of the 130 billion euro deal remained hostage to wrangling among Greek politicians, much to the disgust of voters living through dire economic times.

Papandreou says he announced the referendum on Monday -- sending shockwaves through world markets -- to ensure political consensus for the deal. His opponents have since said they will back it conditionally but accuse him of clinging to power.

"He is clinging to the steering wheel of a car that is heading over a cliff," Yannis Mihelakis, spokesman for the conservative New Democracy party, told Mega TV.

Opposition politicians want Papandreou's resignation and early elections as a price for their support for the bailout deal -- which aims not only to save Greece from bankruptcy but prevent its problems engulfing bigger euro zone economies.

For euro zone leaders -- and Greece's battle to avoid a debt default -- the worst possible outcome would be a stalemate, prolonging the agony over the 130 billion bailout which euro zone leaders agreed only last week.

TOO TIGHT TO FORECAST

Analysts said Friday night's parliamentary confidence vote, which Papandreou called when he announced the referendum plan, was too tight to forecast. However, they had a hunch that Papandreou might just scrape through even though 24 hours earlier his socialist government was on the verge of collapse.

"This is the first confidence vote in many many, years where we cannot tell what will happen in parliament. My feeling is that the prime minister will probably have a positive outcome today," said Costas Panagopoulos, head of Alco pollsters.

PASOK has 152 deputies in the 300-member parliament. But one lawmaker said that while she would stay in the party, she would not back the government in the confidence vote, meaning Papandreou could count at most on the support of 151 deputies.

Only one more defection would strip the government of its majority and probably trigger an early election.

Electoral mathematics meant little on the streets of Athens, where Greeks are struggling with spending cuts, higher taxes and soaring unemployment.

"Papandreou may get the 151 votes he needs tonight. But what does this mean for us? This instability is killing us," said Panayiotis Theofilas, 52, father of two and a shop owner.

"Yesterday I spent all day in front of the TV, worrying. I couldn't work. What if they throw us out of the euro? We are finished."

For many Greeks, Papandreou has turned into the villain rather than the tragic hero struggling to overcome economic, political and social problems that have built up over years.

"The referendum was the worst idea Papandreou ever had. He turned the whole world upside down and now he wants a vote of confidence? How dare he? We are all very angry with him," said Efi Peroyannaki, a 50-year-old shop assistant.

"What happened this week was a disgrace. We looked bad and the Europeans are already sick of paying for us."

On Thursday New Democracy leader Antonis Samaras dropped his opposition to the bailout, which is being pushed by Papandreou's PASOK party, on condition that a short-lived coalition government is formed to take the country to polls.

That means the two main forces in Greek politics now back the deal, despite the new wave of austerity it demands -- on top of cuts which have pushed the economy into recession and brought Greeks on to the streets in sometimes violent protests.

However, in the fractured world of Greek politics this does not ensure the package will win rapid parliamentary approval.

Samaras made Papandreou's stepping down a condition for forming a coalition to pass the bailout quickly through parliament and cancel the referendum. Papandreou told parliament he was not tied to his post.

But people in Athens also had low expectations of the opposition and its ability to work with PASOK. "Papandreou looks stupid and Samaras so arrogant. They have nothing in common and they don't agree on anything," said Theofilas.

Through waves of austerity policies demanded by Greece's international lenders, Papandreou has carried the parliamentary group of his PASOK party with him, despite much grumbling within the ranks.

But a steady trickle of defections has reduced his majority to the point that one or two waverers could inflict a defeat in the confidence vote, expected as late as midnight (2200 GMT).

Greeks gripped by the events gathered around newsstands to catch a glimpse of the headlines on Friday. The financial daily Kerdos captured the mood with its headline: "Everything on a knife-edge", while the pro-government daily Tan Neap ran with: "A balancing act on the edge of a cliff."

Papandreou has called on his PASOK party to rally behind him in the confidence vote. But his public bravado appeared to mask an acceptance that his term may come to an end soon.

Government sources said Papandreou had struck a deal at a cabinet meeting on Thursday under which he would stand down after he had negotiated a coalition agreement with the conservative opposition -- provided he survives Friday's vote.

Papandreou admitted he had made a mistake in calling on Monday for the referendum on a bailout, the sources said.

Even some of his loyalists have suggested it was time for him to quit after they backed him at the confidence vote.

"I do not want to humiliate my party's president -- the country's prime minister -- by toppling him tonight," PASOK lawmaker Telemachos Hytiris told state television.

"But I want him now to rise to the occasion as a prime minister who has won the vote of confidence with prestige and start discussions tomorrow on a unity government so the country can move ahead."