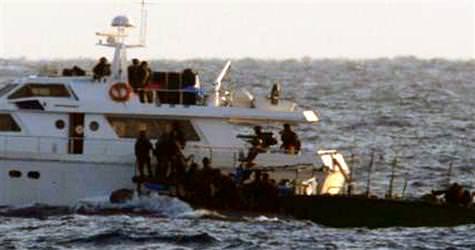 The Israeli navy Friday boarded two boats carrying pro-Palestinian activists toward the Gaza Strip in a fresh challenge to Israel's blockade of the Islamist-controlled territory.

The military said in a statement the boats -- a Canadian vessel called Tahrir and an Irish boat named Saoirse -- which together had 27 people on board, would be taken to the Israeli port of Ashdod.

"The Israel navy soldiers operated as planned, and took every precaution necessary to ensure the safety of the activists onboard the vessels as well as themselves," the statement said.

A military source said nobody was injured in the operation.

In May 2010, Israeli commandos boarded the Turkish Mavi Marmara aid vessel to enforce the naval blockade of the Palestinian enclave, and killed nine Turks in clashes with activists, some of them armed with clubs and knives.

Israel spurned Ankara's demand for an apology over the incident. Turkey expelled the Israeli ambassador two months ago.

Carrying a small amount of medical supplies, the Canadian and Irish boats had sailed from Turkey Wednesday. The Israeli military said they were in international waters when they were stopped, between 40 and 60 miles from the coast.

The activists on board came from Australia, Canada, Ireland and the United States, and included Palestinians and at least one Arab citizen of Israel, organizers said.

The two boats had continued sailing toward Gaza, ignoring instructions to turn around or unload their supplies in Israel or neighboring Egypt, Israeli military officials said.

Citing the need to prevent weapons smuggling, Israel has blockaded Gaza since the Islamist group Hamas seized control of the territory in 2007.

Israeli authorities said once the two boats had reached Ashdod, they would undergo security checks. Those on board would be questioned, then taken to prison service holding facilities where they will wait until booked on flights back home.

They have the right to a court hearing before being deported.

A U.N. report on Israel's interception of the 2010 Turkish ship said the blockade was a "legitimate security measure," adding "its implementation complied with the requirements of international law." Turkey has rejected that ruling.

Pro-Palestinian groups behind the latest attempt to reach Gaza by sea condemn the blockade as illegal and inhumane.

"We are going to keep sending boats until the immoral blockade of Gaza is lifted," Claudia Saba, a spokeswoman for the Irish Ship to Gaza group told Irish state broadcaster RTE.

Paul Murphy, a socialist member of the European Parliament on board one of the ships, wrote in an earlier blog post that the mission was in "response to the call from people within Gaza to try to break the siege they suffer under."

Israel allows humanitarian aid, food and some other supplies into Gaza for its 1.7 million people, many of them impoverished refugees, via land crossings it closely monitors. Gaza also has a border with Egypt over which goods are imported.

Gaza's Hamas leader Ismail Haniyeh praised the attempt to break the blockade in a sermon at a mosque on Friday: "We appreciate highly those activists who came in solidarity and we stress that their goal is being achieved whether or not they arrived by exposing (Israeli) occupation (measures)."

Turkey had threatened to give naval protection to future aid flotillas following the 2010 violence, but Ankara has kept largely quiet about this latest operation.

Some of the activists, who dubbed their mission "Freedom Waves," had participated in a thwarted seaborne attempt in June to reach Gaza, which was blocked from setting sail from Greece.