Syrian forces kill 19, Assad is not keeping his word 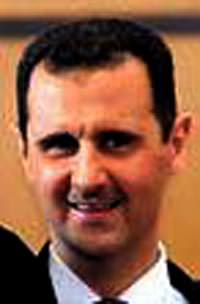 Syrian security forces killed at least 19 people and wounded dozens as they cracked down on protests after Friday prayers, activists said, casting doubt on whether an Arab League plan can end months of bloodshed.

The government offered an amnesty to anyone with weapons if they reported to police within a week, "as long as they did not commit any crimes of killing," state television reported.

The gesture did not appear to be part of the Arab League plan, accepted by Syria Wednesday, under which the army would leave turbulent cities, political prisoners would walk free and a dialogue with the opposition would begin within two weeks.

U.S. State Department spokeswoman Victoria Nuland reacted dismissively when asked if she thought Syrians should participate in the amnesty, saying: "I wouldn't advise anybody to turn themselves into regime authorities at the moment."

She also accused the Syrian government of failing to carry through on the Arab League plan and said the United States had no confidence that it would. "We have a long, deep history of broken promises by the Assad regime," she told reporters.

Violence has, if anything, intensified since the Arab League agreement was announced, amid reports of sectarian killings.

Troops fired on protests that erupted after Friday prayers in many towns, killing at least seven people in Kanaker, south of Damascus, nine in the city of Homs, where tanks were again in action, and one in Saqba, near the capital, activists said.

Another two protesters were killed in the city of Hama, 240 km (155 miles) north of Damascus, when security forces fired at several thousand protesters who tried to march to the main Orontes square, scene of big demonstrations before tanks stormed the city three months ago, they said.

"Lots of people fell on the ground with bullet wounds and we are afraid some will not make it," Mohammed, a Kanaker resident, said by telephone.

Citing activists in Kanaker, the Syrian Observatory for Human Rights said a 20-year-old soldier mutinied while his unit was firing on protesters in the town and killed five members of the security forces, including a colonel, before he was shot dead.

Tough media curbs have made it hard to verify events in Syria since protests against President Bashar al-Assad began in March, inspired by revolts against Arab autocrats elsewhere.

Syrian state television denied any killings, and aired footage it said were from areas where protests were reported, showing crowds calmly leaving mosques after prayers. It said four police were injured by gunfire from "armed terrorist groups in Kanaker."

But YouTube footage, purportedly from many towns and cities, showed thousands of people waving flags, with some shouting: "Mother do not cry, Bashar's days are numbered."

One clip, from the town of Taybet al-Imam, near Hama, showed crowds marching along a main street where huge Syrian flags from the pre-Baathist era were draped over buildings, along with the Libyan flag adopted by those who overthrew Muammar Gaddafi.

"The people want the execution of Assad," shouted people at a rally in the town of Deir Baalba near Homs.

Homs has emerged as a protest flashpoint and a centre for emerging armed resistance to government forces. Activists said tank and sniper fire killed at least 22 people in the central city Thursday, mainly in the old Bab Amro quarter.

The violence in Homs, where tanks were bombarding for the second straight day, illustrates how difficult it will be to implement the Arab League plan in a country locked in a deadly struggle between Assad and foes of his 11-year rule.

Diplomats who have seen the agreement say it lacks any timeline for implementation.

Fears that unrest is taking a sectarian turn have mounted this week amid reports of killings of members of Assad's minority Alawite community and counter-killings of Sunni Muslims, who form a majority of Syria's 20 million people.

One woman, named Ikhlas Ashour, said gunmen forced passengers out of the taxi and robbed them of their money and identity cards before killing all the men.

"It was an indescribably ugly scene, I felt like I was living a nightmare," she was quoted as saying.

Another resident, Ghayath Darwish, told SANA gunmen killed some male passengers at random and dragged away their corpses.

The opposition has so far rejected talks with Assad as long as violence continues and has said the only way to restore peace is for the president to step down immediately.

The United Nations says more than 3,000 people have been killed since the uprising against 41 years of Assad family rule began in March. The authorities accuse Islamist militants and foreign-backed armed gangs of killing 1,100 security forces.

Western sanctions and growing criticism from Turkey and Arab neighbors have raised pressure on Syria to end the bloodshed.