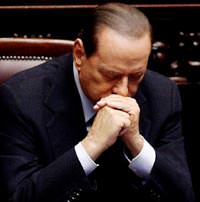 Italian Prime Minister Silvio Berlusconi, under massive pressure to resign, faces a crucial vote on public finances in parliament on Tuesday which could sink his government if enough party rebels desert him.

Berlusconi has denied reports that his resignation is imminent as he struggles to hold his centre-right coalition together, but the increased political uncertainty in Italy has added to turmoil in Europe, hitting global markets on Monday.

Chances of defeat in the vote seem to be receding because the centre-left opposition may abstain to highlight Berlusconi's lack of support, without hindering the essential ratification of 2010's public accounts.

However, the opposition is preparing a subsequent no-confidence motion that could be held within days.

Yields on Italy's 10-year bonds touched their highest since 1997 at 6.67 percent on Monday, a level seen as unsustainable for Italy's massive debt and which could spiral out of control.

Italy has the third biggest economy in the euro zone and its debt worries are a huge threat in the wider crisis facing the continent's single currency.

Berlusconi's failure to adopt reforms swiftly to defuse the debt crisis has fuelled dissent within his party, though estimates vary widely over how many centre-right deputies will jump ship in the key vote in the lower house due at 1430 GMT.

The 75-year-old prime minister spent the weekend trying to win back the support of enough deputies to avoid humiliating defeat in the vote, which he has already lost once.

If he is defeated again, Berlusconi could either resign immediately or be ordered by President Giorgio Napolitano to call a confidence vote.

Berlusconi reiterated his determination to continue at the helm of the government on Monday even though several people close to him, including Interior Minister Roberto Maroni, have said they believe he no longer has a majority.

"We will carry on, we have to be ready to fight because a new unelected government including the left would be the opposite of democracy," Berlusconi posted on his Facebook page on Monday evening.

European equity markets pared losses on Monday following talk that the prime minister was close to resigning, indicating how much markets would welcome his departure.

Italy's government bond prices would recover and the yield spreads would narrow by a full percentage point if the government fell, according to a Reuters survey of 10 fund managers last week.

But even if he goes, there is uncertainty about how Italy can tackle its crisis. Berlusconi and his Northern League allies have insisted the only alternative to him is an election early next year, likely to push back reforms even further.

The possibility of a national unity or technocrat government, preferred by markets, is opposed by Berlusconi and League leaders whose parliamentary support may be needed for it to function.