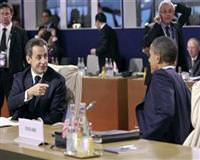 "I cannot bear Netanyahu, he's a liar," Sarkozy told Obama, unaware that the microphones in their meeting room had been switched on, enabling reporters in a separate location to listen in to a simultaneous translation.

"You're fed up with him, but I have to deal with him even more often than you," Obama replied, according to the French interpreter.

The technical gaffe is likely to cause great embarrassment to all three leaders as they look to work together to intensify international pressure on Iran over its nuclear ambitions.

The conversation was not initially reported by the small group of journalists who overheard it because it was considered private and off-the-record. But the comments have since emerged on French websites and can be confirmed by Reuters.

White House press secretary Jay Carney declined to comment on the conversation when asked by reporters traveling with Obama to an event in Philadelphia.

Obama's apparent failure to defend Netanyahu is likely to be leapt on by his Republican foes, who are looking to unseat him in next year's presidential election and have portrayed him as hostile to Israel, Washington's closest ally in the region.

Pushing Netanyahu risks alienating Israel's strong base of support among the U.S. public and in Congress.

Netanyahu's office declined to comment, but one of his deputies, Vice Premier Silvan Shalom, played down the episode.

"Everyone talks about everyone. Sometimes even good friends say things about each other, certainly in such competitive professions," Shalom, a former foreign minister and rival of Netanyahu in the rightist Likud party, told Israel's Army Radio.

Obama and Netanyahu have had a rocky relationship as U.S. efforts to broker a Middle East peace deal have foundered, with the U.S. president openly criticizing Jewish settlement building in the occupied Palestinian territories.

It was unclear why exactly Sarkozy had criticized Netanyahu. However, European diplomats have largely blamed Israel for the breakdown in peace talks and have expressed anger over Netanyahu's approval of large-scale settlement building.

During their bilateral meeting on November 3, on the sidelines of the Cannes summit, Obama criticized Sarkozy's surprise decision to vote in favor of a Palestinian request for membership of the U.N. cultural heritage agency UNESCO.

"I didn't appreciate your way of presenting things over the Palestinian membership of UNESCO. It weakened us. You should have consulted us, but that is now behind us," Obama was quoted as saying.

The October 31 UNESCO vote marked a success for the Palestinians in their broader thrust for recognition as a sovereign state in the U.N. system -- a unilateral initiative fiercely opposed by Israel and the United States.

As a result of the vote, Washington was compelled to halt its funding for UNESCO under a 1990s law that prohibits Washington from giving money to any U.N. body that grants membership to groups that do not have full, legal statehood.

Obama told Sarkozy that he was worried about the impact if Washington had to pull funding from other U.N. bodies such as the U.N. Food and Agriculture Organization and the IAEA nuclear watchdog if the Palestinians gained membership there.

"You have to pass the message along to the Palestinians that they must stop this immediately," Obama said.

The day the conversation took place, the Palestinians announced that they would not seek membership of any other U.N. agency.

Sarkozy confirmed that France would not take any unilateral decisions when the U.N. Security Council discusses a Palestinian membership request, a debate expected later this month.

"I am with you on that," Obama replied.