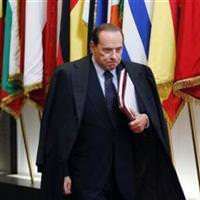 Italian Prime Minister Silvio Berlusconi is set to resign on Saturday after a new budget law is approved in parliament, making way for an emergency government and ending one of the most scandal-plagued eras in Italy's post-war history.

The Chamber of Deputies was due to start a debate at 11:30 on a package of economic reforms intended to reverse a collapse of market confidence that has threatened to trigger a wider crisis across the whole euro zone.

Approval is expected after the measures, which cleared the Senate on Friday, were passed unchanged in the lower house budget commission in the morning.

The definitive approval of the package by the lower house will mark the final act of the Berlusconi government.

He is expected to hold a last cabinet meeting and then go to the Quirinale Palace and hand his resignation to President Giorgio Napolitano.

His resignation will trigger a series of events over the weekend and most likely conclude on Sunday night or Monday morning with the formation of a new government headed by former European Commissioner Mario Monti.

Monti, currently head of the prestigious Bocconi University in Milan, is expected to head a largely technocratic government to push through reforms in an effort to head off a perilous crisis.

In a sign that Monti himself was trying to consult as much as possible before the mandate he was expected to get, he met on Saturday morning with the new head of the European Central Bank, Mario Draghi.

Napolitano and Italian legislators have put the process on a fast track, prompting healthy reactions from the stock and bond markets which have been thrown into turmoil by weeks of political uncertainty in the euro zone's third-largest economy.

Italian bond yields, which shot way above sustainable levels earlier this week, fell sharply in response to acceleration of the process leading to Berlusconi's resignation and the approval of the reforms.

Doubts about the impact of the political chaos on Italy's towering public debt created panic in financial markets this week, sending borrowing costs over above a "red line" of 7 percent -- the level at which Portugal and Ireland had to seek an international bailout.

International leaders including U.S. President Barack Obama, French President Nicolas Sarkozy and the head of the International Monetary Fund Christine Lagarde have expressed hopes a new government can be in place quickly.

However, even as preparations for a transition begin, signs of opposition have already appeared, with Berlusconi's PDL party split between factions ready to accept a Monti government and others deeply opposed.

Their main coalition partner, the regional pro-devolution Northern League has declared it will go into opposition, underlining the risk that the new government will lack the broad parliamentary support it will need to pass deep reforms.

"The convulsions in the center-right at the prospect of a government led by Mario Monti signal a danger: that a divided coalition may be tempted to unload its divisions on the country," the daily Corriere della Sera said.

In another warning of the kind of personal attacks he may soon face, the fiercely pro-Berlusconi Il Giornale daily declared Monti had joined "the caste", the tag given to Italy's deeply unpopular political elite.

"SuperMario joins the caste: 25,000 euros a month," it said in a front page article that referred to the salary Monti will receive following his appointment as senator for life by Napolitano this week.

Berlusconi has dominated the Italian scene since 1994 and has led three governments in 17 years.

After making a fortune in property and media, Berlusconi created his own party almost overnight to fill the void on the center-right caused by the demise of the Christian Democratic party in the corruption scandals in the early 1990s.

His third and last stint in power, which began in 2008 when his center-right won the national elections, has been the most scandal plagued.

His second wife left him 2009, accusing him of frequenting minors.

He leaves office facing separate trials for fraud and paying for sex with an underage prostitute.

For much of this year, Italian newspapers have been filled with lurid details of "bunga-bunga" parties with young women at his luxurious residences in Rome, Milan and Sardinia.

One leaked wiretap had him boasting of having sex with eight women in one night and being so occupied with starlets that he was only prime minister "in my spare time".