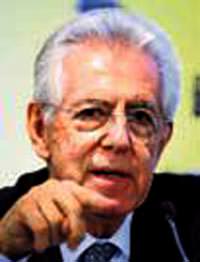 Technocrat leaders in Italy and Greece were rushing to form governments as they sought to limit the damage from the euro zone debt crisis on Monday, with stocks and the euro rising when markets opened in Asia.

Italy's president asked former European Commissioner Mario Monti on Sunday to form a government to restore market confidence in an economy whose debt burden is too big for the euro bloc to bail out.

Investors will pass initial judgment on his leadership when Italy's Treasury asks investors on Monday to bid for up to 3 billion euros ($4 billion) in five-year government bonds. At an auction last week, the government's borrowing costs surged above 6 percent and kept rising to levels well beyond what the country could afford to pay over the longer term.

In Asia, stocks and the euro rose on hopes that Monti and Greece's new prime minister, Lucas Papademos, would take decisive action.

"Symbolically perhaps it's (Berlusconi's exit) a positive -- it sends the message that it's putting a certain chapter behind them but the fact remains is that this is difficult medicine to administer and it doesn't really matter who gives the order, it's going to be a difficult pill to swallow," said Jack Ablin, chief investment officer at Harris Trust in Chicago, which oversees $50 billion.

Outgoing Prime Minister Silvio Berlusconi made a parting call on Sunday for the European Central Bank to become a lender of last resort to prop up the euro.

"This has become a crisis for our common currency, the euro, which does not have the support that every currency should have," he said in a video message.

But ECB policymakers have made plain they want to keep the onus on governments to bring their debt burdens under control and have rebuffed world leaders who want the bank to ramp up its intervention on bond markets to defend Italy and other vulnerable debtors.

"Monetary financing (of government debt) will set the wrong incentives, neglect the root causes of the problem, violate the legal foundations on which we work, and destroy the credibility and trust in institutions," ECB governing council member Jens Weidmann told the Financial Times, adding he was confident "Italy will be able to deliver".

While Italy's problems and the long-drawn-out departure of the flamboyant Berlusconi have pushed the collapse of the much smaller Greek economy backstage, the IMF and European leaders will keep Papademos, under pressure to implement radical reform aimed at staving off bankruptcy.

Papademos succeeds George Papandreou, whose proposal to hold a referendum on the country's bailout terms prompted EU leaders to raise the threat of a Greek exit from the currency bloc.


The new Greek leader, a former central banker who oversaw his country's entry to the euro zone in 2002, must win a Wednesday confidence vote in his cabinet before meeting euro zone finance ministers in Brussels on Thursday, state television reported, where he will be expected to outline next year's draft budget before putting it to parliament.

Polls published in Sunday's newspapers show Papademos has the support of three in four Greeks. But he will face his first protest in front of parliament on Monday afternoon from left-wing demonstrators who accuse the new government of working in the interests of bankers.

Meanwhile inspectors from the "troika", the International Monetary Fund, European Central Bank and European Union, are due to start arriving in Athens on Monday, piling the pressure on Greece to qualify for a second bailout worth 130 billion euros ($180 billion) and an 8 billion tranche from the earlier bailout, needed to finance bond payments due at the end of the year, according to Reuters data.

"It's unfortunately turning into a vicious cycle," said Harris Trust's Ablin. It's a banking crisits that turned into a sovereign crisis and now that's boomeranging back into a banking crisis."

EU monetary affairs chief Olli Rehn has said the EU and IMF will not release the tranche without written assurances from all Greek parties that they will back the measures, but New Democracy leader Antonis Samaras, who has given only tepid backing to the unity government, has said he will sign no pledge under external pressure.

In Rome, people sang, danced and opened bottles of champagne, and an impromptu orchestra near the palace played the Hallelujah chorus from Handel's Messiah when news spread on Saturday that the scandal-plagued Berlusconi, one of Italy's richest men, had resigned.

German Chancellor Angela Merkel welcomed signs of an end to the weeks of uncertainty in Italy, saying the approval of a reform package in parliament on Saturday was "heartening".

She also urged euro zone states on Sunday to give more powers to Brussels and push towards closer fiscal union.

She told Germany's ZDF television: "We want to keep the euro, along with all the other states that have it. But that requires a fundamental change of our policy and 'more Europe'."