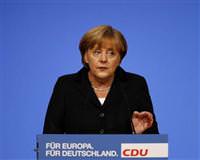 The cold-blooded murders of nine immigrant shopkeepers by neo-Nazis is an "inconceivable" crime for Germany and a national disgrace, Chancellor Angela Merkel said on Monday.

Among calls for her government to launch a fresh attempt to outlaw the far-right NPD party to prevent it from receiving taxpayer funds for its political campaigns, Merkel vowed to leave no stone unturned in fighting right-wing terror.

"We're seeing something inconceivable -- we suspect right-wing extremists are responsible for horrible acts of violence, for right-wing terror. It's a disgrace and mortifying for Germany and we'll do everything we can to get to the bottom of this. We owe that to the victims."

Germany, which has long tried to make amends for its Nazi past, was stunned to learn that a right-wing extremist cell was responsible for the killings of eight men of Turkish origin and one man with Greek roots between 2000 to 2006. A police woman was also shot dead in 2007. "The Brown Army Faction" was the title story on the new edition of Der Spiegel news magazine, a reference to the colour of Adolf Hitler's Nazi party and the name of the Red Army Faction (RAF) responsible for attacks in the 1970s and 1980s.

The Turkish government demanded a full investigation. "The arrest of neo-Nazi terrorist organisation members... shows how right our country and our people living abroad are in sensitivities and warnings about far right, racist and xenophobic attitudes and acts," Turkey's Foreign Ministry said.

About three million people with Turkish roots live in Germany, a third of whom are German citizens. Germany last month commemorated the 50th anniversary of the labour agreement which first brought large numbers of Turks to the country to help meet its dire labour shortage.

Several regional German political leaders called on Merkel's government to try again to outlaw the NPD, the far-right party that has seats in two regional state assemblies and is a political home for some right-wing extremists. The NPD received 1.06 million euros ($1.45 million) for political party financing from taxpayers in 2010.

The constitutional court in Karlsruhe thwarted a previous government attempt to ban the Nationaldemokratische Partei Deutschland (NPD) in 2003 because evidence used had come from paid informants and was thus deemed tainted. "I'd like to see another attempt to ban the NPD put back on the political agenda," said Joachim Herrmann, the influential state interior minister in Bavaria and a leader in the conservative Christian Social Union (CSU). "The court needs to reconsider its objections. Karlsruhe needs to change its view."

On Monday German leaders faced criticism of concentrating on left-wing terror threat while being blind to the right-wing amid disclosures that the neo-Nazi killers had gone on their murder and bank robbery spree undetected for more than a decade. "I get the feeling that there are different priorities when it comes to terror," said Cem Ozdemir, a leader of the opposition Greens party with Turkish heritage.

On Friday, federal prosecutors said they had linked an unsolved series of murders of foreign-born food vendors and shop owners, nicknamed the "doner murders" to the neo-Nazi cell. Police searching a burnt-out motorhome in the eastern German town of Eisenach found the bodies of two men suspected of the murder spree. They also found in their house in Zwickau, which had been set ablaze, handguns used in the police woman's murder and the so-called "doner murders", as well as neo-Nazi DVDs.