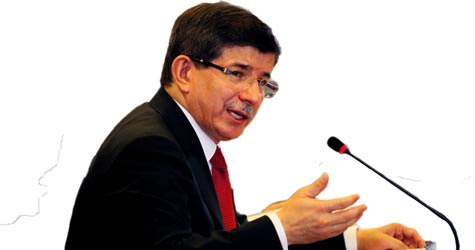 Rising Middle East power Turkey said on Monday it would galvanize a global campaign to halt Syrian President Bashar al-Assad's repression of his people, adding that Damascus could no longer be trusted after attacks on diplomatic missions in Syria.

"Turkey's policy on this issue is open and clear. We will stand by the people's just demands and we will mobilize the necessary regional and international platforms to counter this Syrian pressure," Foreign Minister Ahmet Davutoglu told the Turkish parliament.

Davutoglu is due to meet Arab foreign ministers in Rabat on Wednesday, on the sidelines of a Arab-Turkish forum.

Non-Arab Turkey, after long courting Assad, has lost patience with its neighbor's failure to end an eight-month crackdown and implement promised democratic reforms.

Turkey now hosts the main Syrian opposition and has given refuge to defecting Syrian soldiers, and Davutoglu on Monday praised an Arab League decision to suspend Syria.

Despite tough talk, Turkey has moved cautiously, compared to its European Union and U.S. allies, which have been swift to approve sanctions against Damascus, as Ankara weighs the domestic and regional challenges involved.

Underlining the extent to which ties between Ankara and Damascus have deteriorated, protesters armed with sticks and stones attacked Turkish diplomatic missions in Syria over the weekend, burning the Turkish red and white flag.

"We will take the most resolute stance against these attacks and we will stand by the Syrian people's rightful struggle," Davutoglu said, adding it was "no longer possible to trust the Syrian government."

The Turkish minister met Syrian opposition members over dinner in Ankara on Sunday, in a clear demonstration of growing anger with Damascus.

Turkey, a Muslim member of NATO and a rising political and economic power in the Middle East and North Africa, has supported "Arab Spring" uprisings in the region.

But Syria -- an Iranian ally with a volatile ethnic and religious mix lying in a web of regional conflicts -- poses particular challenges.

Davutoglu said; "Syria was a much more important test because we have a 910 km (570 miles) border with Syria and we have deep family ties."

Turkey said earlier this month it was preparing a list of sanctions against Syria to complement a Turkish arms embargo already in place, but talk of such measures all but disappeared from the government's agenda as Ankara focused on attacks by Kurdish militants and an earthquake in the southeast.

The sanctions, which were expected to affect military, banking and energy ties, had been originally expected to be announced during a visit by Prime Minister Tayyip Erdogan to border camps providing refuge for Syrians in September. But that visit to the camps was suspended after Erdogan's mother died.

European Union governments agreed on Monday to extend sanctions against Syria to 18 more individuals associated with a violent crackdown on dissent.