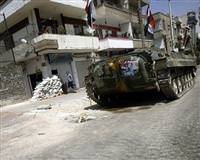 Syrian army defectors attacked an intelligence complex on the edge of Damascus early on Wednesday in a high-profile assault that highlights how an eight-month popular uprising against President Bashar al-Assad risks sliding into armed conflict.

The attack coincided with intense international pressure on Assad to halt the bloodshed, which the United Nations says has cost more than 3,500 lives since protests erupted in March.

Arab foreign ministers were meeting in Rabat after Syria's suspension from the Arab League took effect on Wednesday.

"As of Nov. 16 we will apply the suspension of Syria's participation in the Arab League," Moroccan Foreign Minister Taieb Fassi Fihri told Reuters. Syria's chair was empty as an Arab-Turkish forum got under way in the Moroccan capital.

Turkey, now a fierce critic of its former ally, said Syria had failed to honour an Arab peace plan to halt the unrest.

"The regime should meet the demands of its people," he said. "The collective massacres in Syria and ... the bloodshed cannot continue like this."

Western countries have tightened sanctions on Syria and on Monday Jordan's King Abdullah became the first Arab head of state to urge Assad to quit after ensuring a smooth handover.

In the early months of the uprising, attempts by security forces to crush street protests accounted for most of the violence. But since August that there have been increasing reports of army defectors and armed civilians fighting back.

Activists said Free Syrian Army fighters fired machineguns and rockets at a large Air Force Intelligence complex on the northern edge of the capital at about 2:30 a.m.

A gunfight ensued and helicopters circled over the complex, on the Damascus-Aleppo highway. There were no immediate reports of casualties. Syrian state media did not mention the attack.

A Western diplomat in Damascus described the assault as "hugely symbolic and tactically new", saying that if the reported details were true it would be "much much more coordinated than anything we have seen before".

"To actually attack a base like this is something else, and so close to Damascus as well," said the diplomat, adding that fighting in recent weeks involving army deserters in the town of Rastan and the city of Homs resembled a localised civil war.

"It's not a nationwide civil war, but in very specific locations, it is looking like that," said the diplomat.

An Arab official, who did not want to be named, said insurgent attacks on loyalist forces had risen sharply in the last 10 days, although the army remains largely cohesive.

The Free Syrian Army was set up by deserters and is led by Colonel Riad al-Asaad, who is based in southern Turkey.

It announced this week that it had formed a "temporary military council" of nine defecting officers, led by Asaad.

The statement said the Syrian Free Army aimed to "bring down the regime and protect citizens from the repression ... and prevent chaos as soon as the regime falls", adding that it would form a military court to try "members of the regime who are proven to have been involved in killing operations".

Syrian television showed thousands of Assad's supporters rallying in Damascus and Latakia to mark the day his father Hafez al-Assad seized power in 1970. It said the crowds were also voicing their rejection of the Arab League's decision.

"God, Syria, Bashar, that's all!" shouted demonstrators in central Damascus, who turned out in heavy rain to wave flags and posters of the president. Two large posters of Assad and his father hung from a building. "Neither rain nor sanctions will stop us expressing our nationalism," the television said.

The Arab League has stopped short of calling for Assad's departure or proposing any Libya-style military intervention, but its ostracism of Syria is a blow to a country whose Baath party puts Arab nationalism at the center of its credo.

Syrian authorities have banned most independent media. They blame the unrest on "armed terrorist gangs" and foreign-backed militants who they say have killed 1,100 soldiers and police.

Hundreds of people have been killed this month, which is turning into one of the bloodiest periods of the revolt.

Syrian forces killed at least six civilians on Tuesday in the northwestern province of Idlib and in and around Homs, activists said. Several deaths on both sides also were reported in fighting between army defectors and loyalist forces.

The Syrian Observatory for Human Rights said the bodies of three young activists killed in custody were delivered to their families on Tuesday, including Osama al-Sheikh Youssef, 23.

Syria says it remains committed to the Arab peace plan, which calls for the withdrawal of troops from urban areas, the release of prisoners and a dialogue with the opposition.

State media said more than 1,000 prisoners, including prominent dissident Kamal Labwani, were freed on Tuesday. But human rights campaigners say tens of thousands have been detained since anti-Assad protests began..

The Arab League met opponents of Assad the same day and asked them to lay out their plans for a transition of power.

A Saudi prince said Assad's "lack of response" to peace efforts meant he would have to go. "I think it is inevitable that he will have to step down in one form or another," former intelligence chief Prince Turki al-Faisal said in Washington.

The U.S. State Department said it hoped the Arab League would use Wednesday's meeting to send a "forceful message to Assad that he needs to allow for a democratic transition to take place and end the violence against his own people".

Russia, one of Syria's last few foreign friends, met the Syrian National Council and urged it to talk to Assad's government. The council responded by pressing Moscow to join calls for the Syrian leader to quit.