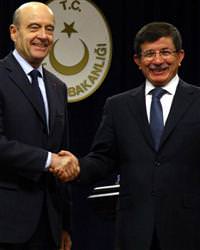 French Foreign Minister Alain Juppe said he doubted Syria would respond positively to an Arab League initiative aimed at stopping the bloodshed that has killed more than 3,500 people, according to a United Nations count.

The Arab League has suspended Syria and given it until the end of the week to heed the Arab peace plan that entails a military pullout from around restive Syrian cities and towns, threatening sanctions unless Assad acts to halt the violence.

Juppe, speaking alongside Turkish Foreign Minister Ahmet Davutoğlu, said that France was ready to work with the Syrian opposition and that tougher sanctions were needed on Damascus.

He also said he opposed any unilateral intervention in Syria, but left the door open for wider action, saying any such move should be mandated by the United Nations.

Hundreds of people have been killed in Syria, including civilians, army deserters and forces loyal to Assad, since it agreed on November 2 to withdraw troops from urban areas and release political prisoners under an Arab League initiative.

Syria says it is trying to implement the deal but has called on neighbouring countries to do more to stem a flow of arms to the opposition and end what it says is a media campaign of incitement against Syria authorities.

It has also invited the Arab League to bring civilian and military observers to monitor events on the ground.

"We will accept the protocol which includes admitting observers to Syria, but we have some observations which we will deliver to the general secretariat of the Arab League," a Lebanese official quoted a Syrian government official as saying.

On Friday the Syrian Observatory for Human Rights said security forces shot dead at least five protesters and wounded dozens when they fired to disperse protests in the cities of Deraa, Homs, Hama and the Damascus suburb of Erbin.

Syria's state media had no immediate reports of violence on Friday. Syria has barred most independent journalists from the country, making it difficult to verify reports from activists or officials. Authorities blame the violence on foreign-backed armed groups who they say have killed 1,100 soldiers and police.

Protesters called on foreign countries to expel Syrian ambassadors in a gesture of support for the opposition.

"Whoever fears God should expel the Syrian ambassador" read a banner at a demonstration in the southern province of Deraa, where the uprising erupted in March.

In the eastern province of Hasaka, people chanted, "Why are you afraid? God is with us!" In Homs and Hama, protesters dancing arm in arm shouted "The Free Army is our army," referring to army deserters who have waged an escalating campaign of attacks on state targets.

Opposition sources said on Wednesday the Free Syrian Army had killed or wounded 20 security police in an assault on an Air Force Intelligence complex on the outskirts of Damascus, the first of its kind in the revolt against Assad.

Russia said on Wednesday the raid showed that the conflict in Syria was "already completely similar to real civil war."

Eight villagers were injured when tank shells and heavy mortars fell for three hours on Tal Minnij and Maarshamsheh and surrounding farmland, the activists said.

"Hundreds of families have left. Electricity and Internet services have been cut off," said one of the activists, who gave his first name as Raed.

France, Britain and Germany plan to ask the U.N. General Assembly's human rights committee to approve a resolution condemning the violence in Syria, before putting the non-binding measure to a vote in an Assembly plenary session.

"These threats will not yield any results," Ghadanfar Roken Abadi said on Friday. "Intensifying these threats...only increases our enthusiasm for popular unity with Syria, which has seen more then 10 million people take to the streets to show their support for the Syrian regime."