Turkey is key to persuading Syria 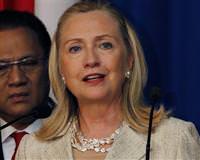 U.S. Secretary of State Hillary Clinton said on Friday that regional moves by the Arab League and Turkey were key to persuading Syrian President Bashar al-Assad to halt the violence against civilians.

U.S. Secretary of State Hillary Clinton said on Friday Syria could slide into civil war but she did not foresee the global community intervening in the same way it did in Libya.

"I think there could be a civil war with a very determined and well-armed and eventually well-financed opposition that is, if not directed by, certainly influenced by defectors from the army," Clinton told NBC news in an interview in Indonesia, where she was attending a regional summit.

"We're already seeing that, something that we hate to see because we are in favor of a peaceful protest and a nonviolent opposition," she said.

Clinton said, however, that she saw no prospect for the kind of coordinated international intervention that occurred in Libya, where a NATO-led coalition won a U.N. mandate to mount air strikes in support of rebels fighting Muammar Gaddafi.

"There is no appetite for that kind of action vis-a-vis Syria," Clinton said, pointing to regional moves by the Arab League and Turkey as key to persuading Syrian President Bashar al-Assad to halt the violence against civilians.

"I believe that what the Arab League does and Turkey says have more affect on the Syrian government and people than the United States, said Clinton."

The United States and the European Union have both imposed a series of targeted sanctions against Damascus. But U.N. sanctions are seen as unlikely given opposition from Russia and China, which last month vetoed a draft Security Council resolution condemning Syria.

The Arab League has suspended Syria and set a Saturday deadline for it to comply with the Arab peace plan, which entails a military pullout from around restive cities and towns, threatening sanctions unless Assad acts to halt the violence.

Clinton told CBS in a separate interview that it was clear Assad's days were numbered.

"Look, Assad's going to be gone; it's just a question of time. What we hope is that they avoid a civil war, that they avoid greater bloodshed, that they make the changes that they should have been making all along. And we think the Arab League pressure is probably the most effective pressure," she said.