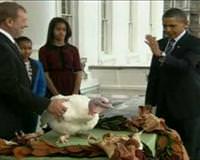 It may not help the economy, but President Barack Obama found another move he can make without congressional approval on Wednesday: pardon a turkey.

Obama, a Democrat, has spent the last several weeks criticizing the Congress and Republicans for not embracing his jobs proposals, launching a "We Can't Wait" campaign to highlight executive actions he was taking to boost the economy without lawmakers' input.

With tongue in cheek, the president brought the same logic -- minus the economic incentive -- to the annual White House ritual of sparing a turkey.

Americans celebrate Thanksgiving on Thursday, and turkey is the centerpiece of the traditional holiday meal.

"Some of you may know that recently I've been taking a series of executive actions that don't require congressional approval," Obama told a chuckling crowd at the White House, with his daughters standing at his side.

"Well, here's another one. We can't wait to pardon these turkeys. Literally. Otherwise, they'd end up next to the mashed potatoes and stuffing."

Obama, grinning, raised his hand over one bird, dubbed "Liberty," and pronounced it safe from slaughter.

Obama said Liberty was chosen from a flock of 30 birds and raised by students from a high school in Minnesota, near the farm where the birds came from.

He used the occasion to poke fun at Washington and the media, saying Liberty and his feathered friend Peace, who was not visible, had been trained for an outing before the press.

"I'm told that in order to prepare Liberty and Peace for their big day, the students exposed them to loud noises and flash bulbs so that they'd be ready to face the White House press corps. This is actually true," he said.

"They also received the most important part of their media training, which involves learning how to gobble without really saying anything," Obama deadpanned.

Both birds will spend their remaining days living at Mount Vernon, the estate of the first U.S. president, George Washington.

"So Liberty is ready for his turn in the spotlight. And after he finishes a round of cable hits and a few Sunday shows, he's going to retire to a life of leisure at Mount Vernon -- the same place where George Washington spent his golden years," Obama joked.

Obama and his family later went to a local food bank. Before they left he said they would bring with them "two unnamed turkeys, who weren't so lucky."