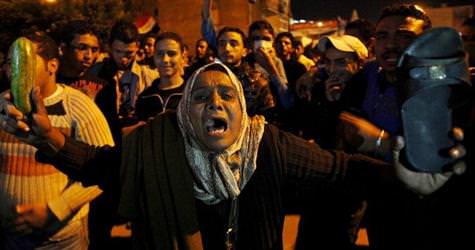 Activists vowed to crank up pressure on Egypt's generals on Friday with an overwhelming show of people power to cap almost a week of protests against army rule that have left 41 people dead.

State media said the army leaders picked a political veteran in his late 70s to form a national salvation government, a choice that was quickly snubbed by many of the young activists who have led the demonstrations in Tahrir Square.

As talk of a Ganzouri appointment filtered through the crowds thronging Tahrir on Thursday night, discussion quickly focused on his age.

"Ganzouri is no good for this transitional period, which needs youth leaders not grandparents," said student Maha Abdullah.

"Appointing Ganzouri is a crisis for the revolution. We must remain in Tahrir," said protester Hossam Amer, a 44-year-old tourist guide.

Metwali Atta, a 55-year-old taxi driver who was camped out in Tahrir, disagreed: "I would like to see Ganzouri as prime minister. The man has a strong character, unlike (outgoing prime minister) Essam Sharaf who was easily bossed around by the military council."

The army, hailed as a champion of the people when a popular uprising overthrow President Hosni Mubarak nine months ago, is now trying to defuse the worst crisis of its tenure.

It has promised to speed up the timetable for a handover to civilian presidential rule and insists parliamentary elections will start on Monday, as planned.

A truce between security forces and hard-line protesters brought a nervous calm to the streets near Tahrir on Thursday after five days of clashes that turned part of the capital into a battle zone and left residents choking in clouds of tear gas.

The Health Ministry said 41 people have died in the violence, state television said early on Friday.

The army council said it was doing all it could to prevent more violence, offered condolences and compensation to families of the dead and a swift enquiry into who caused the unrest.

But reports of unjustified police brutality that have swollen the ranks of protesters continue to filter out in the media.

"The people demand the execution of the marshal," crowds chanted on Thursday, referring to Tantawi, who was Mubarak's defense minister for 20 years.

The unrest in the heart of the capital makes it even harder to dig the economy out of a crisis whose first victims are the millions of poor Egyptians whose frustration spurred the protests against Mubarak.

Egypt's central bank unexpectedly raised interest rates on Thursday for the first time in more than two years, after depleting its foreign reserves trying to defend a local currency weakened by the political chaos.

In fresh blows to confidence, the Egyptian pound weakened to more than six to the dollar for the first time since January 2005, and Standard & Poor's cut Egypt's credit rating.

The economic woes may argue in favor of Ganzouri, whose government virtually balanced the budget, cut inflation, held the exchange rate stable and maintained healthy foreign currency reserves during his time in office from 1996 to 1999.

He introduced some economic liberalisation measures and many Egyptians viewed him as an official who was not tainted by corruption. But his record serving under Mubarak could stir opposition from those demanding a clean break with the past.

Some Facebook activists derided the choice of a Mubarak-era man to steer the country into a new era, listing four ancient pharaohs as useful alternatives if Ganzouri turns the job down.

"Tutankhamun is more suitable because he is from the youth," one said, referring to the boy king of ancient Egypt.

In a communique, protesters called the million-man march on "the Friday of the last chance" for the army to hand over power.

The Egyptian Independent Trade Union Federation called for a workers' march to Tahrir. Another labor rights group called for a general strike to back the protests. Labour unions played an important role in the movement that toppled Mubarak.

Supporters of the army council had said they would hold a rally to back the military. In a statement on its Facebook page, the army council said it was "appealing to them to cancel the demonstration," saying it wanted to avoid divisions.

Suspicion that the army will continue to wield power behind an elected civilian administration has grown in recent weeks as the government and political parties tussled over the shape of a new constitution.

The military council originally promised to return to barracks within six months of the fall of Mubarak, but then set a timetable for elections and drawing up the constitution that would have left it in power until late next year or early 2013.

The United States and European nations, alarmed at the violence of the past few days, have urged Egypt to proceed with what has been billed as its first free vote in decades.

The army and the Muslim Brotherhood, which expects to do well in the election, say it must go ahead, but many protesters do not trust the military to oversee a clean vote. Some scorn the Brotherhood for its focus on gaining seats in parliament.