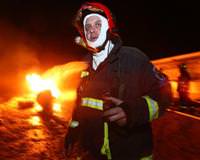 Two buildings in Israel's western Galilee area were damaged, Israeli media said, but there were no reports of casualties. Residents said they heard two explosions and that houses shook.

UNIFIL, the U.N. peacekeeping force in Lebanon, said it had deployed extra troops and patrols in the area and called for restraint. "This is a serious incident in violation of UN Security Council resolution 1701 and is clearly directed at undermining stability in the area," UNIFIL said in a statement.

Israel said it was trying to establish who fired the rockets from Lebanon, but that it held the Lebanese government responsible and would deliver a complaint.

"The Lebanese government is responsible for everything that happens in Lebanon and everything that exits from its border," Home Front Defense Minister Matan Vilnai said.

The Israeli-Lebanese border has been largely quiet in recent years, though some have worried about a possible spillover of tensions from a months-old revolt in Syria against President Bashar al-Assad and from a stiffening of Western sanctions against Iran over its nuclear program.

The Lebanese army said the rocket launchers were found in the Rumaysh area of south Lebanon.

In Lebanon, security sources said four Katyusha rockets were fired into Israel from an area between the villages of Aita Shaab and Rmeish, about 2 km (1 mile) from the border.

They said Israel fired four artillery shells in response, but they landed in fields and caused no damage.

An Israeli military spokesman said the rockets were the first fired since 2009 across a border where a 34-day war was fought in 2006 between Israel and Iranian-backed Lebanese Hezbollah guerrillas.

"Several rockets hit western Galilee. The Israeli army considers the incident severe and is targeting the origins of fire," said a statement from the military spokesman's office.