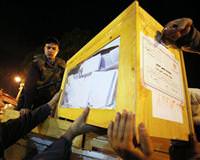 The Muslim Brotherhood's party said on Wednesday its alliance was leading in Egypt's election, which would give the nation's oldest Islamist group a powerful parliamentary platform to challenge the authority of ruling army generals.

State television said first-round results in Egypt's first free election since army officers ousted the king in 1952 would be issued on Thursday, a day later than scheduled because of a high turnout in the largely peaceful poll.

One party said it doubted the alliance led by the Brotherhood's Freedom and Justice Party had won 40 percent of the vote, as stated by an FJP source, but other parties provided estimates that were in line with the figure.

The results, if confirmed and repeated in the two remaining phases of a six-week election process, would position the Brotherhood to jostle for power with the military council that replaced Hosni Mubarak in February after a popular uprising.

The council, under increasing pressure to make way for civilian rule, has said it will retain powers to choose or dismiss a cabinet. But the FJP leader said on Tuesday the majority in parliament should form the government.

"The Brotherhood's goal is to end corruption and start reform and economic development and that's what attracted many to join it, including myself," 28-year-old Ali Khafagi, who is head of the FJP's youth committee, told Reuters.

Khafagi dismissed talk about the Brotherhood banning alcohol or forcing women to wear headscarves if it came to power.

"That could only be done by a mad group and the Brotherhood is not a mad group, but a decent logical group with a good understanding of the Egyptian people and Islam," he added.

Progress towards democracy in the most populous Arab nation will help shape a region convulsed by popular uprisings against autocrats who, like Mubarak, often enjoyed Western support, in part for their role in fighting Islamist militancy.

Islamist parties in Morocco and Tunisia have come out on top in parliamentary elections in the past two months, although in both those countries they campaigned as moderates.

The generals, perceived by many Egyptians as clinging to perks and power, may face a new challenge from a parliament flush with the popular legitimacy gained from the big turnout.

The Brotherhood's party, however, has already said it wants coalition partners. That might force it towards pragmatic policies and compromises on its Islamist principles.

Full results of Egypt's first election since Mubarak's fall will not be known until after voting ends in mid-January.

Two-thirds of 498 lower house seats will be allocated proportionally by party lists and a third to individuals. The FJP said early indications showed it was ahead in both races.

In the party list race, it was followed by the ultra-conservative Islamist al-Nour Party and the liberal Egyptian Bloc, the FJP said in a statement.

The cabinet resigned last week amid demonstrations against army rule in which 42 people were killed. On Friday the generals picked Kamal al-Ganzouri, a Mubarak-era premier, to form a new cabinet, which he has said will be ready this week.

Monday and Tuesday's voting, the first of three rounds which will each be followed by run-offs, passed off mostly peacefully and only minor violations were reported in the election that was watched by international monitors, judges and other observers.

But violence broke out on Tuesday night in Cairo's protest hub of Tahrir Square where protesters are demanding the military step aside immediately. Nearly 80 people were wounded.

Criticizing the authorities, reformist politician Mohamed ElBaradei wrote on Twitter: "Thugs are now attacking the protesters in Tahrir. A regime that cannot protect its citizens is a regime that has failed in performing its basic function."

A member of the liberal Egyptian Bloc alliance said the Brotherhood's FJP had won 40 to 50 percent of votes in Cairo, with his own bloc running second with 20 to 30 percent.

But a much smaller liberal party, the Justice Party, said the Brotherhood's estimates were "very skewed." Spokeswoman Nora Soliman said the Brotherhood was strong in some areas but added: "All the numbers they came out with are presumptuous and are designed to create momentum for the second round."

The once-banned Brotherhood did not start the anti-Mubarak revolt, but the political shift since then has propelled it closer to power, even though the army has yet to step aside.

In an implicit challenge to the military's authority, the head of the FJP said parliament should form the government.

"A government that is not based on a parliamentary majority cannot conduct its work in practice," FJP head Mohamed Mursi told reporters in Cairo's working-class district of Shubra, adding that a coalition government would be best.

One member of the military council has said turnout in the election would exceed 70 percent. The FJP's Mursi put it lower at 40 percent.

General Ismail Atman, an army council member, was quoted as saying the poll showed the irrelevance of the Tahrir protests.

The latest violence there erupted when unidentified youths tried to enter the square, a protest organizer said. Petrol bombs were thrown at protesters and guns were fired. Of the 79 wounded, 27 were taken to hospital, the state news agency said.

Youth parties have struggled to organize since the uprising, and some suspended their electoral campaigns this month to focus on the renewed protests against military rule.

"I wanted to vote for the youth, but no one is organized enough. That's why I voted for the Brotherhood," said Sayed Ismail, 38, who works in a Cairo garage. "I don't want an Islamist party, I just want some organization. Enough chaos."