Turkish lorry fired at in Syria 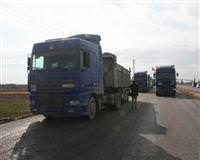 Fire was opened on a Turkish lorry, which was just 15 kilometers from the border in Syria and headed home, by civilian dressed shooters. The truck driver managed to escape without harm.

Meanwhile, the Syrian army is continuing to increase their presence along the Turkish border.
Over 60 armored military vehicles have been deployed to the former customs field at Syria's Bab-El Havva Border Gate. In addition, soldiers have also been dispatched to the region and have positioned themselves in areas establishing security points. This activity has aroused apprehensions for Turkish international transporting lorry drivers. Syrian officials state that the reason behind the military activity in the region is to prevent the looting incidents that have transpired in cars that passed through the Aleppo-Cilvegözü border gate.