Time names "The Protester" 2011 Person of the Year 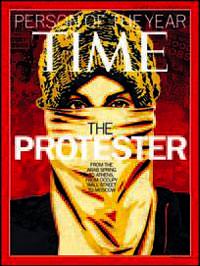 From the Arab Spring to the Occupy Wall Street movement, "The Protester" was named Time magazine's 2011 Person of the Year on Wednesday.

Time defines the Person of the Year as someone who, for better or for worse, influences the events of the year.

"Is there a global tipping point for frustration? Everywhere, it seems, people said they'd had enough," Time Editor Rick Stengel said in a statement.

"They dissented; they demanded; they did not despair, even when the answers came back in a cloud of tear gas or a hail of bullets. They literally embodied the idea that individual action can bring collective, colossal change," he said.

On almost every continent, 2011 has seen an almost unprecedented rise in both peaceful and sometimes violent unrest and dissent.

Protesters in a lengthening list of countries including Israel, India, Chile, China, Britain, Spain and now the United States all increasingly link their actions explicitly to the popular revolutions that have shaken up the Middle East.

Admiral William McRaven, head of U.S. Special Operations Command and overall commander of the secret U.S. mission into Pakistan in May that killed al Qaeda leader Osama bin Laden, came in at second place on the Time list.