Libya's new army to be trained in Turkey 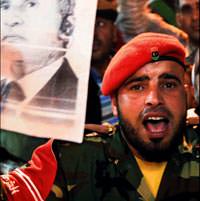 Libya’s National Transitional Council Chairman Mustafa Abduljalil has announced that they have a reached an agreement for their new army to be trained in Turkey.

Abduljalil paid a visit to Istanbul last week and explains, "We had the opportunity to discuss a number of issues with Prime Minister Erdoğan. We reached an agreement for Libya's new army to receive training in Turkey. Meanwhile, our efforts for a transition to an organized military continue. Next week, we will announce the work we have done led by Minister of Defense Osama al-Juwali."
During his trip, Abduljalil also paid a visit to the 'freedom fighters' that were wounded in the uprising against Muammer Gaddafi and were in Turkey to receive treatment.