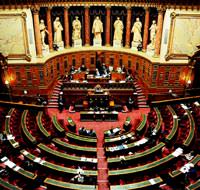 Commenting on the Armenian bill accepted by the French Senate, famous legal professor Dr. Guy Carcassonne, "There are three principles that make France the nation it is: Equality, independence and fraternity. This sort of bill does not comply with independence. There is obscurity present in the bill’s text, which is unacceptable when dealing with criminal law.”

France's famous constitutional law professor Guy Carcassonne contributed to the text of appeal presented to the Constitutional Council for the cancellation of the bill which intends to criminalize the denial of Armenian allegations.

Prof. Dr. Guy Carcassonne (61), who is on the faculty for Paris-Nanterre University and also teaches law at a number of the world's most prestigious universities, is also a constitutional advisor. Carcassonne discussed the text submitted to the Constitutional Council with Sabah and expressed that the bill does not comply with France's principle of independence. "I underlined two elements in the text. The first being freedom of speech and the second being the elusiveness present in the text. Obscurity is unacceptable when it comes to issues involving criminal law," states Carcassonne.

Is the draft bill being debated in the French Assembly just?

"I have no doubt that genocide transpired. However historical truths are not the business of legislation. Not in France, nor in any other country. There are three principles that make France the nation it is: Equality, independence and fraternity. This sort of bill does not comply with independence. Once the bill was passed certain senators and ministers reacted and then took action. In light of the historical camaraderie with Turkey, a significant majority want to ensure that such legislation is at the very least respectful of the principles in our constitution. It's a good thing there was a majority."

Which main subject titles were brought up in the text submitted to the Constitutional Council?

"My theses are based on two fundamental elements. The first being freedom of speech. This protects the freedom of speech even if expressions and ideas are hurtful to others. If the person on the other side does not agree with their opinions, they must absolutely accept their right to express them. The French Constitution draws a single line here: ideas or expression must not in any way harm another individual or public order. This is a violation of constitutional rights. However, this is not a situation that pertains to this. In addition, there are significant differences between events such as the Jewish genocide. The Jewish genocide was ruled as such in accordance to an international agreement (Nuremberg, 1946). There is not a single characteristic of the Jewish genocide that could be compared to the Armenian genocide.

My second argument in my thesis is this: The assembly establishes a punishment for a crime. The Constitution then applies that punishment if the crime was 'clearly' and 'definitely' committed. First of all it is completely unnecessary to punish the denial of an incident that did not transpire in France. Secondly, the bill not only intends to criminalize denial, but it also includes the term 'extreme belittling.' However, such terminology is obscure and its meaning unclear. Thirdly, the bill refers to the denial or extreme belittling of incidents recognized as genocide by France. Although this is a reference to the French legislation established in 2001 labeling Armenian allegations as so-called genocide, there also exists legislation referring to genocides in Ruanda and former Yugoslavia.
Nobody knows if this bill intends to include these genocides. Such obscurity is unacceptable when it comes to debating criminal code."

How would such a bill affect relations between two nations?

"The Council will make a decision within one month. When I think rationally, I can say that I am optimistic of the results. That the bill will endanger Turkey-France relations is definite. It is extremely unnecessary to be put into such a situation. For hundreds of years now, Turkey and France have had amicable relations. This friendship will survive this rocky period and will continue for years to come and I am very pleased about this."