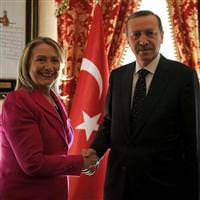 Prime Minister Recep Tayyip Erdoğan hosted U.S. Secretary of State Hillary Clinton, who was in Istanbul for the second Friends of Syria Group meeting held in Istanbul, at his office in Dolmabahçe.

Clinton was greeted by AK Party Deputy Chairman Ömer Çelik, upon her arrival to the Istanbul Prime Ministry Office. The meeting between Erdoğan and the U.S. Secretary of State took place for one hour and 45 minutes and was closed the press.

A short clip of footage from the meeting was released to the press. According to the footage, Clinton was met by Erdoğan in the greeting hall. Upon seeing Erdoğan, Clinton stated 'I am very pleased to see you again. You look very well. And today you gave a very powerful speech." As she sat down Clinton, also commented on the Bosphorus, by stating, "This is a beautiful view."

Prior to the meeting, Clinton delivered a speech at the second Friends of Syria Group meeting held in Istanbul in which she stated that the Syrian opposition needs to independently gather in peace to establish a simultaneous momentum against Syria.

Expressing doubt regarding whether or not Bashar Assad's regime will conform to the peace plan established in conjunction with the U.N. after the bloodshed that has been transpiring in Syria for a year now, Clinton requested that world countries act in solidarity against the Syrian regime, which she referred to as "staging a war against its own people."

Even though the United States administration has refused to consider military options to prevent the ongoing crisis in Syria, Clinton underlined the fact that "no one could sit and wait any longer."
Stating "We have gathered at a tight time for Syria and the region," Clinton requested that world nations urgently stand behind a plan that ensures further sanctions against Syria, humanitarian aid and support for the opposition as well as "brings justice to those accomplices that have relished in the Assad regime's human rights savagery." Reminding of the promises made by the Assad regime to withdraw their forces, to silence heavy weaponry, to allow for peaceful demonstrations and for journalists and humanitarian aid to be allowed in the region, Clinton stated.

"Instead of withdrawing Assad's troops, they have been redirected to cities and towns throughout Syria, initiating a new wave of attacks. Instead of allowing access to humanitarian aid in the region, Syrian forces have tightened their blockade in areas such as Homs. Instead of initiating a political transition, the Syrian regime continues to crush dozens of peaceful demonstrations."

Clinton also warned that the Syrian regime will not remain unpunished for their crimes committed and stated, "Our message to those delivering the orders as well as to those fulfilling them should be clear. Put an end to killing your own citizens or else you will face serious consequences. Neither your citizens nor the international community will forget this."