The massacre of Bosnia will never be forgotten 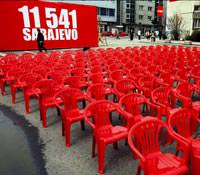 On Friday, row upon row of empty red chairs were set up in the city center, each one to represent the 11,541 victims of the siege of Sarajevo, Bosnia on the 20th anniversary of the war which broke out in the center of Europe.

The massacre which transpired in the Bosnian capital of Sarajevo following the dissolution of Yugoslavia was remembered yesterday in pain and tears. In mourning of those who lost their lives, 11,541 red chairs were lined up on in the capital's Titova street, which was closed off to traffic.

A ceremony held following the Friday prayer had a 750 member chorus consisting of children and students singing heartfelt sons in remembrance of the tragic event in history.

It is thought over 100,000 lives were actually lost in the war which began on April 6th, 1992 and went on until 1995. A number of high-level military members responsible for leading the war, including Radovan Karadžić and General Ratko Mladiç are currently being tried by the International Criminal Tribunal for the former Yugoslavia.